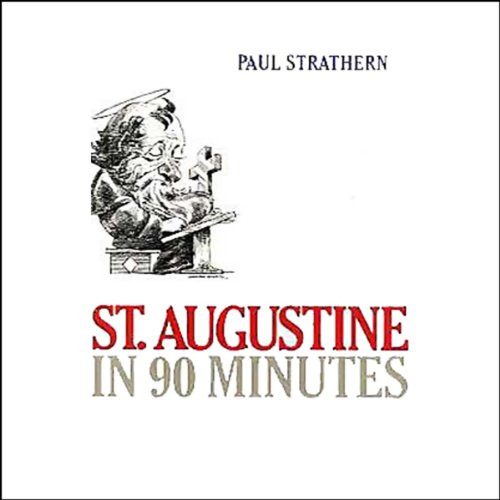 By: Paul Strathern
Narrated by: Simon Vance
Try for $0.00

Augustine's struggles with sex and a domineering mother, followed by his spiritual crisis and conversion to Christianity, detailed in his Confessions, ultimately led him to his major contribution to philosophy: the fusion of the two doctrines of Christianity and Neoplatonism. This not only provided Christianity with a strong intellectual backing but tied it to the Greek tradition of philosophy. In this way Christianity managed to keep the flame of philosophy burning, however dimly, through the Dark Ages. Augustine also produced important philosophic ideas of his own, including theories of time and subjective knowledge that anticipated by many centuries the work of Kant and Descartes.

In St. Augustine in 90 Minutes, Paul Strathern offers a concise, expert account of St. Augustine's life and ideas and explains their influence on man's struggle to understand his existence in the world. The book also includes selections from St. Augustine's work, a brief list of suggested readings for those who wish to delve deeper, and chronologies that place St. Augustine within his own age and in the broader scheme of philosophy.

"Well-written, clear, and informed, they have a breezy wit about them. I find them hard to stop reading." (The New York Times)

What listeners say about St. Augustine in 90 Minutes

This book is more of a history lesson than an examination of the writings and evolution of beliefs of St. Augustine. The author seems to genuinely dislike Augustine, and makes fun of him throughout the book. If you're hoping to gain more insight into the contributions Augustine made to Christianity, this is not the book for you.

I got this expecting a 90-minute summary of Augustine's philosophy. I would have settled for a short bio. but what I got was primarily someone with a grudge making fun of Augustine, and even that is in an ineffectual, unsubtle way.

Not so much an exploration of Augustine as a biography and then Strathern's two cents. Hey, Paul, if you don't like a philosopher, don't write a book about him! Possibly worthy of a casual listen.

so much of these "90 Minutes" of his are filled up with his snide editorializing and opinions and "hot takes" .... most of them so-so to fairly clever ... but WHEW.... something about the way this series is presented (i guess it's that old "book by its cover" thing) makes you think that you'll be getting SORT OF an attempt at something LIKE "objectivity" but wwwwWOW is that not the case with Paul Strathern .....

his Hegel "90 Minutes" had MASSIVE problems similar to this one ..... and in THIS one,... just EVERYthing that Augustine did that was "Church-y" rather than "Philosophical" was this baffling, absurd, idiotic waste of time .... as if THIS is somehow an "intellectual take" on the History of Thought ... yyyYUCK.

and, AGAIN, these "90 Minutes" felt like they were MOSTLY what a sad stupid idiot Augustine was for caring so much about "Church-y" stuff and ALMOST ZERO discussion of Augustine's PHILOSOPHY .... which is exactly what Paul Strathern is so upset that Augustine didn't do enough of for Paul Strathern....!!!!! is anyone else seeing the irony in this?????

Completely disgraceful misreading of Saint Augustine, doesn't even understand the point of the pears. A high school student would have done better

The author clearly has disdain for St. Augustine and theology in comparison with Greek philosophy. If you are going to do a brief review of someone’s life it’s best to leave personal opinions aside.

I've never heard an author insult a subject's major works, mother, and major works like Strathern does in this book.

Almost felt like reading a Jack Chic tract. Talks constantly about Augustine wasting his time on things that as a bishop was central to his job and life's focus. Calls his 2 major works unreadable despite there being many today who consider them essential reading.

Glad it was a free book, but with his very transparent bias, doubt I'll listen to the other free tracts of his I got access to.

If you could sum up St. Augustine in 90 Minutes in three words, what would they be?
aka Cliff Notes

Would you recommend St. Augustine in 90 Minutes to your friends? Why or why not?
Yes - I've listened to each book in the series about a major philosopher that is available on Audible. Strathern's books don't have the analytical depth found in Will Durant's "The Story of Philosophy" books, but he does a good job summarizing each philosopher's biography, major philosophical points, and criticisms. Additionally, Strathern's breadth is broader than Durant's in that he covers a greater number of philosophers. I believe that the time spent listening to these books has been well-spent.

My reviews for each book in the series about a philosopher are identical.

What about Robert Whitfield’s performance did you like?
Voice is clear, well-modulated, and easily understood, even at 1 1/2 speed.

This is the most concise explanation of Augustine I've heard. Fun times. Also a good comparison with other philosophers.

The author showed a very poor understanding of Augustine

More time is given to arguing that Augustine was a moralistic hypocrite and expounding on the psychology that must have made him that way than actually explaining his arguments. The philosophy that is explained is skimmed over and misrepresented taking it out of its medieval context. Overall the case is made that Augustine was somehow one of the greatest Christian philosophers in spite of his Christianity.