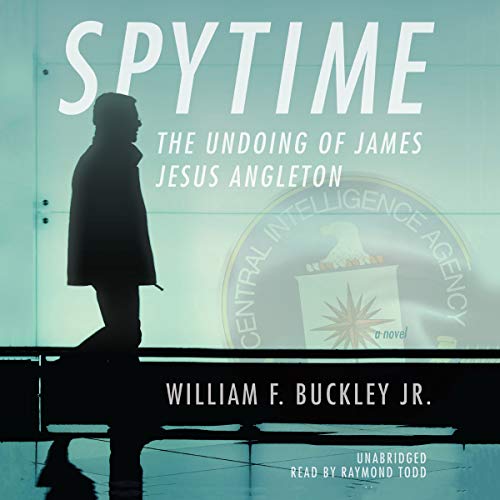 James Jesus Angleton was the master, a legend in the time of spies. Founder of U.S. counterintelligence at the end of World War II, ruthless hunter of moles and enemies of America, his name is synonymous with skullduggery and intellectual subterfuge. Now, best-selling author William F. Buckley, Jr., presents a subtle and thrilling fictional account of the spymaster's life.

From his early involvement in the World War II underground to the waning days of the Cold War in Washington, D.C., Angleton pursued his enemies with a cool, calculating intelligence. Convinced that there was a turncoat within the CIA itself, he confused his enemy by misleading acts and deceptive feints to distort his real objective, to capture and expose a traitor. The result was near-victory for American Intelligence...and defeat for himself.

A brilliant re-creation of his world, Spytime traces the making, and tragic unmaking, of a man without peer and, in the end, a man without a country to serve.

"The ultimate in spy novels, with real characters and studied speculation on certain events by Buckley, who met many of the key players, is is a tense, heroic tale of a real Cold-War legend." (New York Daily News)
"Spytime is a quiet-time read for those who like their espionage erudite and their intelligence intelligent." (USA Today)

What listeners say about Spytime

This book is not worth a minute of your time

William Buckley should stick to political interviews and commentary if Spytime is a good example of his novel writing. His characters, at least two of whom, James Jesus Angleton and Kim Philby, are two of the most fascinating spies and counterspies of all time, never leave their cardboard images. Buckley's sex scenes are laughable, but perhaps laudable in a man of his conservative stripe. You can easily mistake them for massage therapy sessions. He violated the first rule of sex writing: if you cannot write the scene at least as erotically as Henry Miller, skip it. But the worst sin of Spytime is that it is incredibly dull, leaving out some of the most explosive incidents in the wonderful world of espionage from 1950 to 1974 and the exciting conversations that surrounded them. Buckley could have easily gleaned these exciting incidents from public records and embued them with dynamite suspense and interest, if he were John Le Carre. He is not even close, alas. Don't make my mistake and listen to this book.

3 star book with a 1 start reader

I like William F. Buckley, his later works are very satisfying. This book is not his best and the monitone perfomance of the reader makes for a very hard "read".

I enjoyed much of the book, but felt very little developement for such an interesting time period.
And the ending was weak, made it difficult to really be able to recommend as a satisfying listen.

The narrative lost focus. The section on Tony Cresti seemed to have no place in the story about James Jesus Angleton. I was expecting history and I got fiction.

James Angleton and Bill Buckley are legendary icons of the twentieth century. Reading Buckley's words describing Angleton during the historic years of the Cold War is not only an exploration of that era and the events that remain a mystery, but an mesmerizing insight into the author as well.
These are the men who shaped the world as it is today and whose giant personalities will be recalled in tony DC bars for decades to come. Their names are the stuff of legend. Buckley must have been so much more insightful and self aware to be so ready to access the empathy he portrays as an author describing another such giant.

I am a fan of William Buckley's books and thought I would enjoy this one. I was wrong. The story did not flow and the monotone narration was boring. If you are looking for a good spy novel try "The company" instead.

No Second Chance for Spytime

You know, one often picks up a book and within the first 15 - 20 pages realizes that -- perhaps -- choosing that particular book was a mistake. However, if the author has demonstrated good writing in the past, one might stick with it for a while longer, assuming that the writer was just having the equivalent of opening night jitters.

That is not the case with Spytime. I didn't like the book. However, I find myself to be somewhat challenged in expanding upon that opinion because of the strictures placed on reviewers by Audible's Review Guidelines, among which is the following: "What not to include: Harsh, profane or discriminatory language." This presents me with a classic exercise in subjectivity perspicacity. For example, if I were to opine that the book is a stinkeroo; would adherence to the Guidelines oblige me to enjoin that tack in favor of something more banal, such as "this book has odiferous undertones?" In the same vein, would the Guidelines spike characterizations of the book as being abysmal, appalling, or atrocious in favor of "lacking any redeeming literary value?" I can not help but wonder what verbiage might be used by one of the Algonquin?s luminaries under similar circumstances.