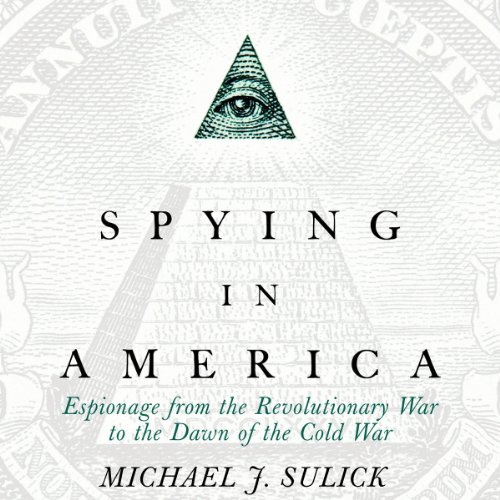 By: Michael J. Sulick
Narrated by: Kevin Pierce
Try for $0.00

Can you keep a secret?

Maybe you can, but the United States government cannot. Since the birth of our country, nations large and small, from Russia and China to Ghana and Ecuador, have stolen the most precious secrets of the United States.

Written by Michael Sulick, former director of CIA's clandestine service, Spying in America presents a history of more than 30 espionage cases inside the United States. These cases include Americans who spied against their country, spies from both the Union and Confederacy during the Civil War, and foreign agents who ran operations on American soil. Some of the stories are familiar, such as those of Benedict Arnold and Julius Rosenberg, while others, though less well known, are equally fascinating.

From the American Revolution, through the Civil War and two World Wars, to the atomic age of the Manhattan Project, Sulick details the lives of those who have betrayed America's secrets. In each case he focuses on the motivations that drove these individuals to spy, their access and the secrets they betrayed, their tradecraft or techniques for concealing their espionage, their exposure and punishment, and the damage they ultimately inflicted on America's national security.

Spying in America serves as the perfect introduction to the early history of espionage in America. Sulick's unique experience as a senior intelligence officer is evident as he skillfully guides the listener through these cases of intrigue, deftly illustrating the evolution of American awareness about espionage and the fitful development of American counterespionage leading up to the Cold War.

" Spying in America could only have been written by an intelligence professional as experienced and knowledgeable as Michael Sulick. He knows the intelligence and counterintelligence disciplines in a way most are never exposed to. His special insights are invaluable as he weaves connections between events and cases that are essential.... This book is a fast, easy read with compelling material that should be on the bookshelves of any real student of the subject." (David G. Major, president and founder of the CI Centre and SPYPEDIA)
"Sulick's book is an extraordinarily valuable addition to the historical literature on espionage. In it he adds new insight on some of the well-known instances of spying in America but more importantly he illuminates many of the lesser-known cases that hold important lessons for scholars and practitioners alike. In doing so, he brings to life an aspect of American history that few understand or know about and performs a genuine service to both the academic and national security professions." (John McLaughlin, Former Deputy Director and Acting Director, CIA)
" Spying In America reveals how important espionage has been to the American chronicle. Historian Michael Sulick tells the story from a unique perspective - a career clandestine services officer who knows what is important. As motivating as Lawrence of Arabia; as insightful as le Carré; as reliable as David McCullough...indispensable reading for a basic foundation." (Hayden B. Peake, former army and CIA intelligence officer)

What listeners say about Spying in America

The author ended up the Director of Clandestine Service which explains much why we relied on luck so frequently rather than skill. A much more accurate analysis of counter espionage problems in the US during the cold war can be gleaned from M Stanton Evans.

Spying in America
Espionage from the Revolutionary War to the Dawn of the Cold War
By: Michael J. Sulick
Narrated by: Kevin Pierce
This book was one I received from freeaudiblecodes and I am so glad I did! It is so rich in information but also presented in an entertaining way. I was never bored. The book covers spying from the Revolution War to more recent times.

The more famous stories of spies I thought I would know a lot about because I am a big history nut but boy was I
arrogant and a fool! The book went into so much behind the story, with hidden secrets that I only knew a small portion of the story! I was amazed and excited! A lot of these were women too! It also discussed how slaves were used.

There were plenty of lesser known, or unknown to me, cases that were just as astonishing! Not only did the book describe the cases and who was involved but often more about the background of those people. This really made them come alive and gave me a glimpse as to why they did what they did.

If you like history, spies, a good mystery, or you're just a curious person than I would recommend this book! I was never bored and the narrator was excellent!

Well written an well narrated. The book doesn't present a great number of cases, but those it does are instructive of the nature of American espionage past, present and likely of the Fourier. Excellent book.