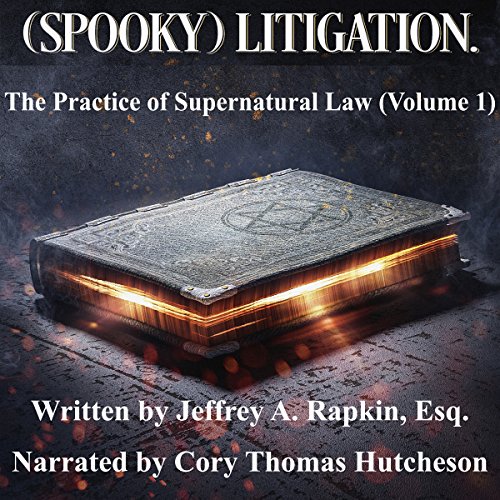 By: Jeffrey A. Rapkin Esq.
Narrated by: Cory Thomas Hutcheson
Try for $0.00

Martin Sandberg, an unwilling practitioner of "Supernatural Law", represents a woman attempting to divorce her previously deceased husband who refuses to go away. Sandberg also files a breach of contract lawsuit on a "deal with the devil"; files a stalking injunction case against a poltergeist; represents an immortal who's been in prison for a century because he was sentenced to "life without the possibility of parole"; and is called to mediate a dispute over a pair of "lucky" golf clubs that happen to be just a little too lucky.

To add to his troubles, Sandberg becomes embroiled in a case of epic importance: A client who is a young father-to-be seeks Sandberg's help in Family Court, but his wife's pregnancy holds a dark and powerful secret.

To prevent the chaos and destruction they could impose upon the world, an age-old system has been in existence forcing beings of darkness and power to use humanity's legal systems. Creatures of myth and legend are required to engage the services of an attorney and seek court assistance when there is a dispute. The use of otherworldly force is not permitted.

Snug safely under a "blanket of ignorance", most humans remain unaware of the existence of supernatural beings and the legal disputes which involve them. A select few professionals are required to participate and assist in the resolution of paranormal conflicts. Martin Sandberg is one of those professionals. This is his story.

What listeners say about (Spooky) Litigation.

I hope this is the first in a long series.

A fresh and very enjoyable story.just the right mix of procedure and story.i can't wait to read what this author puts out next.

I loved this book. I hope there are more to come soon. Truly fun characters

Well read. It has humour and decent plot. I hope there is a follow up. It had a similar feel to the Laundry novels.
Recommended!