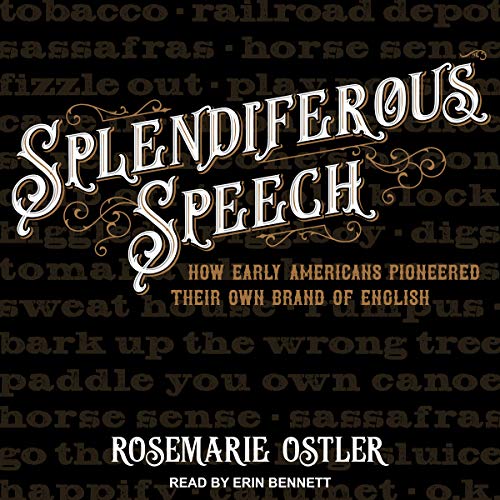 How Early Americans Pioneered Their Own Brand of English
By: Rosemarie Ostler
Narrated by: Erin Bennett
Length: 8 hrs and 54 mins
Categories: Education & Learning, Words, Language & Grammar
5 out of 5 stars 5.0 (1 rating)

What does it mean to talk like an American? According to John Russell Bartlett's 1848 Dictionary of Americanisms, it means indulging in outlandish slang - splendiferous, scrumptious, higgeldy piggedly - and free-and-easy word creation - demoralize, lengthy, gerrymander. American English is more than just vocabulary, though. It's a picturesque way of talking that includes expressions like go the whole hog, and the wild boasts of frontiersman Davy Crockett, who claimed to be "half horse, half alligator, and a touch of the airthquake."

Splendiferous Speech explores the main sources of the American vernacular - the expanding western frontier, the bumptious world of politics, and the sensation-filled pages of popular 19th-century newspapers. It's a process that started with the earliest English colonists (first word adoption - the Algonquian raccoon) and is still going strong today. Author Rosemarie Ostler takes listeners along on the journey as Americans learn to declare linguistic independence and embrace their own brand of speech. For anyone who wonders how we got from the English of King James to the slang of the Internet, it's an exhilarating ride.

What listeners say about Splendiferous Speech