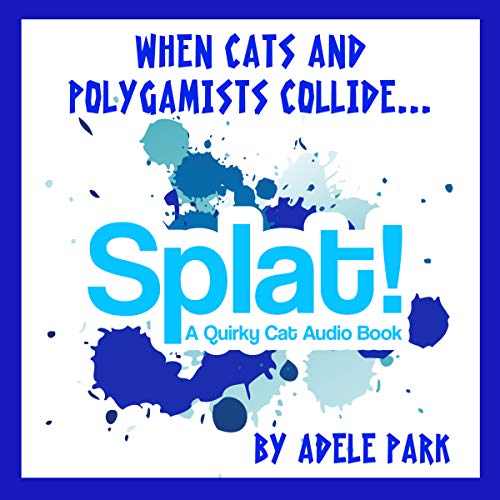 What the world needs now is an audiobook narrated by a snarky cat named Skitters.

When this oversized sack of stripes finds himself upgraded from life in a parking garage to a mansion in Utah, all seems to be well. Then Skitters takes up with Harriet, a fiery feline who belongs to a little girl living in a polygamist cult.

Skitters isn't the only one who tangos with the native polygamists. Brandon Spinkle, the son of a rock star named Scottie Sphincter, can't resist the temptation to kick the hornet's nest at Zion Flats, a dumpy town where multiplicity is the name of the game.

Narrated by a full cast of characters, this outrageous comedy has pounced into the prestigious Audies Award Competition, landing as a finalist in the Original Work category. Splat! A Quirky Cat Audio Book is the purrfect listen for anyone who likes their comedy on the quirky side!

What listeners say about Splat! A Quirky Cat Audio Book

What An Interesting Book

I’m a major purveyor of audiobooks and I haven’t seen too many books that skip print/ebook altogether. Splat! and the rest of the Quirky audiobook series seemed to have done that and I think I understand why. These books seem to work best in audio form and wouldn’t be as good on a page compared to in your ear.

Splat! was one of those books that I went into thinking “that’s a crazy description, let’s see, the book can’t be that balls to the wall bizarre”. I thought wrong and shouldn’t have doubted Park’s ability to write a story that was both interesting and entertaining.

I was cracking up as I read this and kept finding myself thinking “what on earth can she come up with next?” I was surprised page after page as Park threw different satirical punches to keep me on my toes late into the 10th round. I’m not sure the age range that this is written for but parts of it felt like it was for a young adult (minus all of the cursing and adult themes).

It was a book that needed to be read by multiple actors or I don’t think it would have worked. The full cast performance stands out since you know who is talking when and there doesn’t need to be all of the descriptors (since it’s written in first person).

Splat, while not for everyone was one of those books that I wasn’t sure what to expect and in the end, I’m glad I went into it with an open mind.

Zany off the wall entertainment

This award winning author once again provides a funny quirky story with surprise twists and turns. This time the narrator is a cat, which just adds to the fun. Her cast of VO talent do a terrific job in this entertaining and sometimes ridiculous wacky audio book. The tale is filled with so many wacky characters that Ms. Park could be compared to a modern day P.G. Woodhouse.

Adele park has done it again! I've been following Ms Park's audio books for years now and was greatly anticipating her latest one: "Splat! A quirky cat audio book". if you are a fan like I am you'll love this one. You'll know many of your favorite characters and locations: Moon Mckenna, the Stratton family, Scotty Sphincter, the Rectal Surgeons, Shlick von Shlopp, Nancy Neptune, Zion Flats, Navel, Gecko Gulch, Juniper Hollow and the Oasis.

But this time there is a cool Kitty with an attitude and a Bronx accent. "Skitters" is the funniest cat I've ever heard! He has the down low on how cats and dogs ( and even humans ) think. This scrappy feline is a hoot!

I give this book 5 stars. Check it out or one of Ms Park's four other audio books. You won't be disappointed!!!

So,I thought that I would like this book.I really tied.I found some parts fun but couldn't get past the crass,grossness of most of it.I was given this book by the narrator,author or publisher free for an honest review.