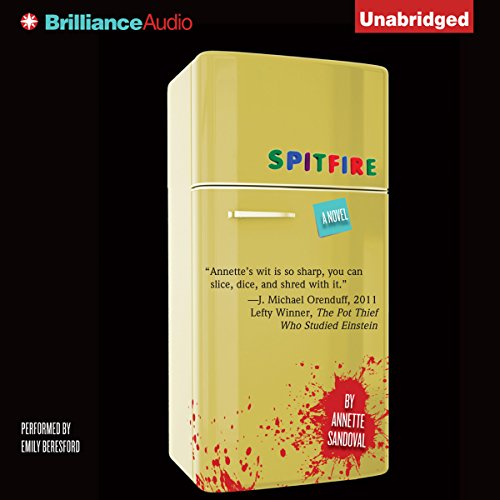 Tomi Reyes is a documentary filmmaker who moonlights as a receptionist to pay the bills. It’s an easy gig - until she gets promoted, and her somewhat interesting life goes totally insane.

For starters, her new boss, Scott Martin, morphs from nice guy to creepy dictator in the space of five seconds. Then, the bodies of her friends start turning up in their refrigerators. Tomi may suspect Scott, but all of the evidence is pointing to her! She’s wondering what to pack for prison, when a childhood pal Nicholas “Nickels” Turino is the (very hot) FBI agent assigned to the case. When the killer sets his sights on her, she realizes she’ll have to unmask the psycho herself or die trying.

DO NOT BUY THIS BOOK!

Worst. Book. Ever.The story is so terrible that my brain refuses to put together sentences to describe it. The only word that keeps repeating over and over inside my head is: badbadbadbadbad!!!!!!!!!Followed with: make it stop make it stop make it stop make it stop!!!!!!!!!!!!!!!!!!!!!!!!!!The narrator makes you long for braille and weep for sign language.I can not believe someone actually published this story. That same individual must have chosen the narrator. I had to finally turn it off because I found myself getting angry. And I'm never angry. I've never written a negative review in my entire life, not even when I got sent a replica purse from an ebay seller!If I could have thrown the CD out the window I would have, but Mp3's robbed me of that blessed emotional release. I have listened to hundreds of books and this is by far one of the worst I've every had the misfortune of buying.Stay away. Far, far away.

The new Douglas Preston & Lincoln Child book being released on December 11th. They are true masters. Narrator, Renee Auberjonois is pure honey to my ears. His voice is the icing to the cake of character Agent Alloysius Pendergast.

I honestly wanted to drive my car into a ditch. HORRIBLE!!!!!

What character would you cut from Spitfire?

All of them, including the author, publisher, and narrator.

Listen, I really wanted to like this story. But, the story was just too crazy! Plus, the main character is a mess. The parts when she goes on and on about her likes and dislikes was funny, but too much. I started to think " is she crazy, or just wacky!"

What a switcheroo! She sets you up for one thing and pulls something else out of the hat.

What does Emily Beresford bring to the story that you wouldn’t experience if you just read the book?

She does a good reading. Lots of life in her voice!

Was Spitfire worth the listening time?

Well, Like I said, it had its cute parts. But the storyline was to erractic.

Some good editing in parts, would have made it a better read.