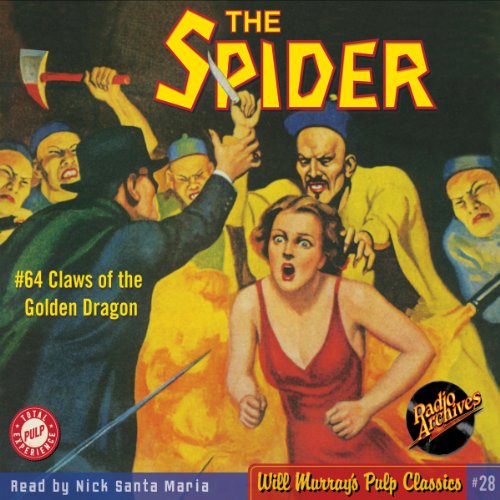 For our latest Spider audiobook, we've jumped ahead in time to 1939 and one of the most dramatic and horrific exploits of Richard Wentworth's nightmarish career.

"Exploits" might not be the operative term for Claws of the Golden Dragon. It's actually one of the most intense ordeals the Master of Men ever endured in his decade-long career as a crime hunter. And that's saying a hell of a lot!

It begins with the arrival in New York of a Chinese supercriminal known as the Golden Dragon. His true identity shrouded in secrecy, the Dragon plans to loot America in order to fuel his planned conquest of Asia. Author Novell W. Page took his inspiration from Sax Rohmer's Dr. Fu Manchu , obviously. The editors at Popular Publications loved the sinister Oriental arch-villain. They published Dr. Yen Sin, The Mysterious Wu Fang, and frequently pitted their other heroes, like Operator 5 and G-8, against similar human scourges. The Golden Dragon is among the worst of these.

Claws of the Golden Dragon dates from the period when The Spider magazine was infused with Weird Menace elements, like the fare offered by companion magazines Terror Tales and Horror Stories. In this case, the Golden Dragon has cultivated a hothouse orchid that insinuates its suffocating roots and tendrils into the victim's still-beating heart! Forget Terror Tales, this is Weird Tales territory.

Page milks this new menace for all it's worth. Victims begin succumbing in the first chapter. And by the time Richard Wentworth and the valiant Nita van Sloan have struggled to defeat the Blood Orchids, they too fall victim to this most hideous doom!

Has Norvell Page gone too far this time? Can even the Spider survive this soul-paralyzing predicament? Or will he and his beloved be buried with their own personal funeral flowers feeding off of their stopped hearts?

Once again, Nick Santa Maria takes on the dual persona of Richard Wentworth and his arachnid alter-ego for this nail-biting audio rendition of the January, 1939 issue of The Spider. Michael C. Gwynne reads the thrilling Doc Turner story by Arthur Leo Zagat, "Death's Wedding March!"