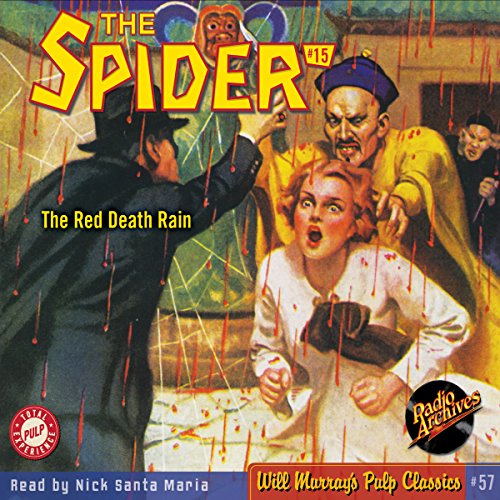 During the difficult decade encompassed by the years 1933-43, a commanding figure blazed his way through a legion of Depression-era supercriminals, Nazi spies and saboteurs. He was wealthy criminologist Richard Wentworth. He was also secretly The Spider!

Never before or since has there been a hero like him. Driven, hunted, and violently committed to exterminating criminals of all calibers. A self-appointed savior of humanity, driven manic-depressive, and possibly undiagnosed paranoid schizophrenic, The Spider was known as the Master of Men.

For this latest release in our Will Murray Pulp Classics series of audiobooks, we asked our customers to pick their favorite Spider novel for recording. Many stories were nominated, but none outpolled any other. We did discover that most of you wanted to hear brought to life one of Norvell Page's epic tales pitting the Master of Men against a villain in the vein of Fu Manchu, Dr. Yen Sin or Marvel Comics' the Mandarin.

So we selected The Red Death Rain, the first of these white-hot face offs, wherein a malevolent mastermind has poisoned all of the liquor, cigarettes and coffee available to Manhattan. His name: The Red Mandarin. It's well known that Marvel Comics' writer Stan Lee was a faithful follower of The Spider magazine during his Depression youth. Could Lee have been thinking of this story when he created the Iron Man villain known as the Mandarin? You decide.

First printed in the December, 1934 issue of “The Spider, The Red Death Rain” is a thrill ride from start to finish, and boasts the most electrifying final scene in any of Page's thrilling works. Many consider it the most unforgettable novel of the entire series.

Once more, Nick Santa Maria brings the action to vibrant life, narrating with a fever-pitch intensity worthy of the bloody pulps.

What listeners say about Spider #15, December 1934