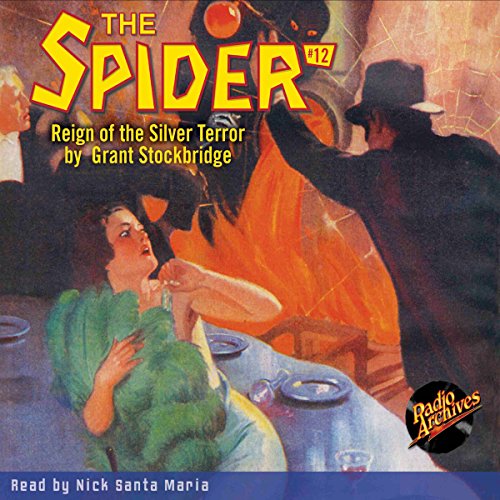 Fear stalked the corridors and offices on Capitol Hill, for it was from the ranks of the mighty - the rulers and lawmakers of America - that the Silver Assassins sought their victims! Singly, in pairs, and in numbered groups they died, laying down their lives for their country - while panic spread, and the Spider, alone aware of the terrific catastrophe that impended, fought through black, bodiless shadows to reach and destroy the menace that festered underground!

For 10 grim years, the Spider battled the underworld, imprinting his scarlet seal on the bodies of the criminals he slew. No one knew his name. Pursued by the police, sought by the mob, the Master of Men crushed crime with a blazing intensity never witnessed before or since. Now he's back with a vengeance in a new series of audiobooks retelling his pulp-pounding exploits, as chronicled by Norvell W. Page, writing as Grant Stockbridge.

Page was a master of the dramatic. In his earliest Spider novels, he seemed determined to outdo all that came before.

With Reign of the Silver Terror, Page goes all out. Relocating the action to Washington, DC, he plunges Richard Wentworth into a maelstrom of political foment. The Silver King and his deadly assassins are out to overthrow the government of the United States, building a new empire upon a monetary foundation of the precious metal.

From the first chapter, where the Spider rescues a number of US senators from being scalded alive by molten silver, to a bizarre and even unbelievable climax on the Senate floor, where a dead man pops up from his own coffin to point out his killer, this is one of the great over-the-top Spider novels.

That's not all. During the course of the story's events, Nita van Sloan crosses the line from being merely Wentworth's dutiful fiancé to becoming complicit in the Spider's crimes when she makes her first kill!