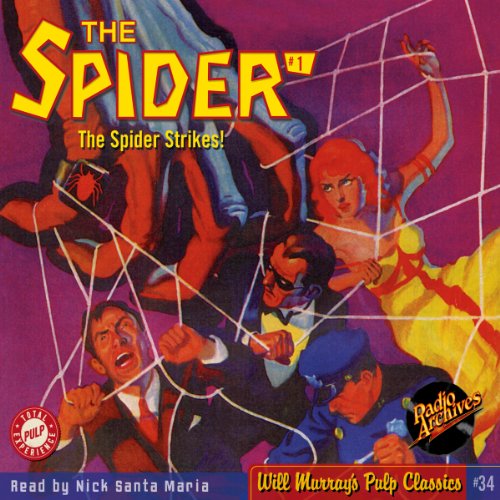 The Spider, but who was otherwise a faceless phantom. The big mystery of the origins of The Spider magazine is that they were not one, but two, writers named R. T. M. Scott. The first was the father to the second. Reginald Thomas Maitland Scott was one of the most famous writers of the 1920s. His son, Robert Thomas Maitland Scott, was new to the writing world. In fact, the younger Scott worked on the staff of Popular Publications during the 1930s, and periodically contributed to their magazines under the pen name Maitland Scott.

The first Spider story - and yet somehow lacking

I picked up this book in the hopes that it would act as an introduction to the pulp character, The Spider. To a small degree it did so. But this is not The Spider as he would eventually become, a compatriot to the likes of The Shadow or Doc Savage. This is his original incarnation as a rather murderous criminologist. His only nods to his later tales is a seal which he places on the forheads of the people he has killed and a rapier cane. I understand that this was very early in the days of the pulls, and larger than life characters were not as common. But this still left me disappointed. Had their been at least some attempt at providing an origin for the character, I would have been satisfied. But nothing on that here. Richard Wentworth comes across as less a hero as he does a serial killer with an agenda. Think along the lines of the recent TV series Dexter.

I will give a couple following volumes a try to see how the character evolves, so I haven't given up on this character yet. I just wish this had been better. Recommended only for those interested in the early years of the pulps.

Feel the bite of the Spider!

You have to know what you are getting here. The Spider is pure pulp violent melodrama, but it is fun! Nick Santa Maria is terrific! There are also 2 additional short stories.