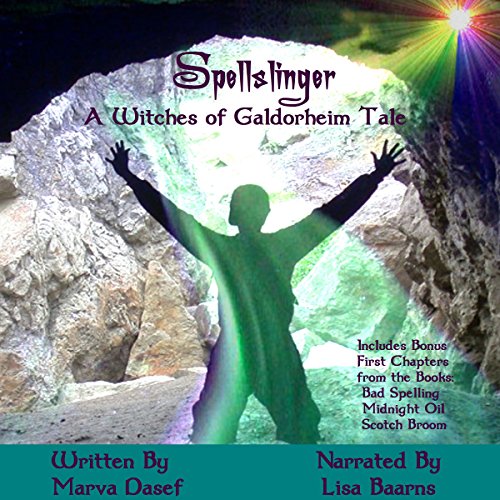 What does a teenage half-warlock, half-vampire do to have fun? Why, build an old west town on a glacier in the Arctic! There, he can play at being the good-guy sheriff up against mean old Black Bart.

That things will go horribly wrong is a given. But how does Rune get into and out of the predicament?

This prequel story to the Witches of Galdorheim series gives the listener a chance to get to know the smart-aleck kid, Rune, before he got his magic down pat.

What listeners say about Spellslinger

Commendations to the Narrator

Where does Spellslinger rank among all the audiobooks you’ve listened to so far?

Let's see. I have four books published in audio, so I can safely say this is among the top four audio books I've listened to so far.

What was one of the most memorable moments of Spellslinger?

The way the main character, Rune, manages to save himself using ingenuity and his his not-so-great magical abilities. To say more would be a spoiler.

I've listened to all the books Lisa Baarns's has narrated for my books. I think she's getting better the more she does. She's becoming comfortable with the magic world of Galdorheim, and that familiarity makes each book better than the last.

This is a short story, so not quite enough for a film. However, the entire Witches of Galdorheim series would make an entertaining animated movie.

The tag line: A Witch Discovers Her Magic with a Little Help from Her Friends

I hope you allow this review since my main purpose here is to give kudos to the narrator and producer for doing a wonderful job.