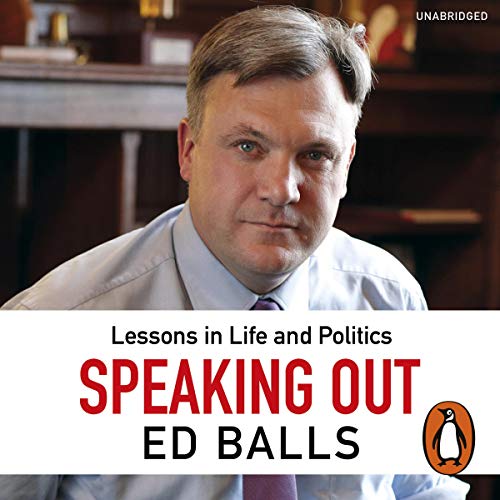 On the night of 7 May 2015, Ed Balls thought there was a chance he would wake up the next morning as the new Chancellor of the Exchequer. Instead he woke up without a job.

For two decades he had occupied a central position within Labour, rising from adviser to Cabinet Minister during the years in power and Shadow Chancellor in Opposition. Throughout one of the most tumultuous periods in recent British history, he made a point of speaking out, whatever the consequences. But on that May morning, he was silenced.

Speaking Out is a record of a life in politics but also much more. It is about how power can be used for good and the lessons to be learned when things go wrong. It is about the mechanics of Westminster and of government. It is about facing up to your fears and misgivings and tackling your limitations - on stages public and private.

It is about the mistakes made, change delivered and personalities encountered over the course of two decades at the front line of British politics. It is a unique window into a rarely seen world. Most importantly, it explains what politics is about and why it matters.

How I misjudged this politician

If you couldn't stand this man when he was in politics, as I couldn't, all the more reason to listen. Ironically, I'd have him back in politics in an instant in 2017. Bit late now...

The slowest marathon runner in Parliament, but the

Edward Michael Balls is a retired British Labour and Co-operative politician who was the Member of Parliament (MP) for Normanton from 2005 to 2010 and for Morley and Outwood from 2010 to 2015, when he lost his seat to Andrea Jenkyns of the Conservative Party. For two decades he had been at the centre of Labour and working his way up through the ranks. This book is a record of his life in politics including how lessons can be learnt when things go wrong. He has since found fame after appearing on Strictly Come Dancing, amongst other things.

Ball comes across as a person who makes generous and insightful judgements of foes as well as friends. He tries hard to understand the motives of people who have crossed him. And in this engaging memoir he portrays a person with a deep personal hinterland, and a dry and sardonic wit. Ball emerges from this book as a rounded, principled human. He is honest in his mistakes but stands firm in a belief that politicians should improve the collective well being of us all. He also acknowledges that people are mistrustful and cynical of politics as whole. He is never cruel or unfair about most of his former colleagues. For example, he is polite about Brown and Blair, but less so about Ed Miliband. But even then, he judges him politically rather than personally. In fact, the lack of recrimination and backstabbing must be a disappointment to readers for whom that is the substance of political life.

Unusually for a autobiography the chapters are organised into specific themes (there are 27 in all). Within the context of each theme Ball then recounts political events that matches it. This unique way of writing makes for some repetition and, call me old-fashioned, but I would have much preferred a chronological order. Although that said one or two of the essays stand alone as little gems of insight and reflection.

The first section of the book was the most interesting. This was less directly about politics. The middle of the book sags as there is a heavy focus on economics. Great if you’re really interested in it, less so if you’re not. If you can power through this section then it shouldn’t detract too much from your overall enjoyment of the book.

Balls goes onto describe Labour's four-week general election campaign in 2015 as "astonishingly dysfunctional" and "we weren't ready – and didn't deserve – to return to government". He also describes Jeremy Corbyn's leadership project as a "leftist utopian fantasy, devoid of connection to the reality of people's lives". He vigorously defends a mixed economy and the necessary compromises involved in a Labour government operating in a capitalist system. For him, politics is all about getting into power and trying to make the world a better place within the inevitable constraints.

Balls also talks in detail about his interiorised stammer. This is a condition that manifests itself in sudden verbal freezes, inaudible on the outside, but panic-inducing on the inside. His initial reluctance to get treatment and subsequent decision to go public, is both compelling and affecting.

In summary:
Whilst not the best autobiography ever written, this is an informative, humorous insight into an under-rated politician's career. You’ll be left with not only an understanding of Balls, but also of the Labour Party, politics and, even some aspects of the British character. Balls comes across as very human and likeable. Not at all like the intellectual and political bully I was used to seeing on TV. He outlines, in a very easy to understand style, what was good about Labour's actions leading up to and following the global financial crisis. Clearly driven by strong sense of values he outlines suggestions for the next generation of politicians of any party.

Interesting in parts but spoiled by narration

Normally like books narrated by he writer but for me Ed's voice actually spoiled it. May try it as a book sometime but have returned the audiobook.

A good account of a career in British politics

Listening to the author tell his own story is a perfect way to listen to an autobiography. But, I feel he held back a little and could have opened up some real insights into the highs and lows, the success stories and the failures. They are covered - and sone so well and with enthusiasm - but I feel he held back somewhat

This book was on a reading list. I never go in for reading autobiographies, what a surprise to enjoy this so much. An utterly human re - telling of a key part of Labour's history. A reflective piece that reveals some of the challenges of juggling family life and a political career. Having Ed narrate it adds massively to its telling.

Where does Speaking Out rank among all the audiobooks you’ve listened to so far?

A frank account of life before, in and after politics. This rates as one of the most interesting audio books I have heard so far.

What other book might you compare Speaking Out to, and why?

Similar to other political biographies from Blair, Brown etc although this had a more humanistic approach.

Good if a little frenetic at times.

Yes and it made me thoughtful.

I never really cared too much for Ed in his political career.

This book paints Ed in a whole new light to me.

What a fair and reasoned guy.

He should have been PM!

Most enjoyable and interesting. Very informative about politics and being an MP and Minister and also very easy to listen to. The chapters were divided up into well thought out themes. Thank you Ed Balls. I wish you were advising the present government!

Ed Balls gives an interesting if slightly sterile account of his time at Westminster. He is underrated both as a politician and as an academic. This book goes some way to putting that right.

A must read for anyone with an interest in the political history of Britain over the last quarter of a century.

A frank, at times very personal, look at the author's own career; Balls explains his thinking at the time and now with hindsight on some of the most important events in modern British politics; from Clause 4 to Brexit.