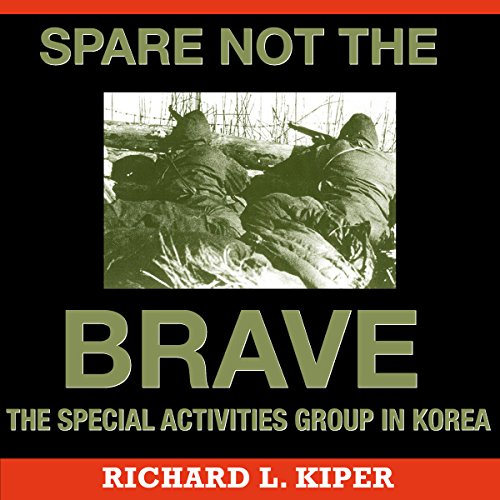 Spare Not the Brave

Spare Not the Brave

The Special Activities Group (SAG) and its subordinate companies have received little attention from historians, despite being an elite combat unit and participating in highly classified and dangerous missions in Korea. Rarely receiving more attention than a footnote, their story usually begins and ends on the night of September 12, 1950, with an amphibious raid near Kunsan. Until their inactivation on March 31, 1951, SAG simply disappears from most Korean War histories. Spare Not the Brave corrects this omission.

Spare Not the Brave tells the story of the extraordinary missions carried out by this group of extraordinary soldiers. Recruited primarily from the Far East Command headquarters, these men received six weeks of training and then were thrust into combat in Korea. Boarding rubber boats in the Yellow Sea and paddling to shore far behind enemy lines, they conducted a diversionary landing near Kunsan, then landed at Inchon, and sailed to the Wonsan area of North Korea. There, SAG was augmented with a battalion of South Korean soldiers. Together they conducted counter-guerrilla operations until overwhelming Chinese intervention forced all Allied units to withdraw from the North.

Drawing on his 26 years of infantry and special forces experience, Kiper brings critical analysis and insight to this previously untold story. Spare Not the Brave fills a gap in the historiography of the Korean War and adds a valuable chapter to the history of US Army special operations.

" Spare Not the Brave should be required reading for Special Forces and War College students, and recommended reading for all soldiers. In fact, anyone with an interest in military history, the US Army, and Special Operations forces will find this book a rewarding read." ( On Point: The Journal of Army History)

I was provided this free review copy audiobook by the author or narrator.&quot; This review is for the audio copy of Spare Not the Brave: The Special Activities Group in Korea by Richard L. Kiper and narrated by Capt. Kevin F. Spalding USNR-Ret. This was a very comprehensive history of a particular army unit as described in the title. As such, be prepared for a listen that would fit right into a college level lecture/class study on this subject. The author does an excellent job providing copious amounts of background information regarding Korea, and events leading up to and through the “police action”. Do NOT get this book if you are expecting an action adventure story based on history. This is a verbal history course with information that I had not known or understood prior to listening to this book. It takes an effort to get through it because of the format and the high level specific information. It is not for the faint of heart in regards to slogging through this information. What made it palatable for me were the efforts of the narrator. His tone, cadence and inflection enabled me to listen to the book in its entirety. I believe that if I tried to read this material I would have stopped about 1/3 of the way through. But, being able to listen to it helped me get through what could be viewed as a tedium amount of superfluous information. In reality, this information helped paint a comprehensive picture of what the Group described in the book was about and their accomplishments. Bottom line, I highly recommend this book, the author and the narrator.

Know the roots of the Korean War and events? SAG ?

I admit to being a history buff. It is said we are doomed to make the mistakes over again unless we learn for the past. So, this book intrigued me with the tensions of today regarding Korea.

The narration is good; he sounds much like a college professor with good dictation and is easy to understand

This book starts at the very beginning of Korea as a nation and its long history of invasions, Warlords and historical lack of stability

We move to the Korean War of the 50s. A tense time with the USA in the start of a decades long Cold War with the PRC and the Soviet Union. The book does an excellent job of explains how it came about and the thinking from all sides.

SAG is part of the fabric of the war. The role comes from few the small amounts of archived material and a lot from the people that were part of the group as the author was given access to the veterans to tell their story and an interesting one it is indeed

Part SOE, SAS , US Military thinking at the time and IMO the start of the later &quot;Hearts &amp; Minds &quot; thinking that was prevalent in my generations war Vietnam.

If you want to understand the roots of the conflict, the start of Hearts and Minds , covert activity etc give fit a listen. I learned a lot about a period I was not very well versed.

I was given this book by the author to review these are my opinions and are honest based on a interest in history and as a Vet.

Lots of info packed I to this one. Learned a lot I didn't know, great insight into the Korean War. Definitely an interesting listen!

Good Story That Needs To Be Told!

Really enjoyed this nariation of history that I have never heard of.I especially like the way Capt. Ret. Spalding was able to keep the story alive with his descriptive word pictures. I highly recommend this audio book to anyone and especially any veterans. Dan Stinson

Not a history buff? Still a good listen...


Let me start by saying I tend to favor Fiction. That being said, this book took around two hours to simply set up the historical background for the stories of the SAG.


If you are a history buff you will love this book. If you want to hear some great stories about the Korean War this is a good book worth wandering through the set up.


Kevin Spalding narrates this book well, clear spoken and articulate. He does this book justice. I, not being a history buff, did not get sleepy in the beginning parts and was kept interested in the stories of the Special Activities Group. If you enjoyed:
Citizen Soldiers by Stephen Ambrose or
Endurance by Alfred Lansing
you would enjoy this as well.