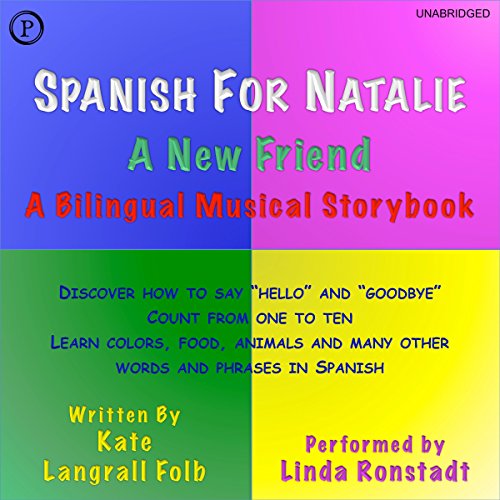 By: Kate Langrall Folb
Narrated by: Linda Ronstadt
Try for $0.00

Natalie is eight years old and has only her new kitten, Popsicle, to call a friend, or so she thinks. Forced by her father to meet the new girl across the street, Natalie discovers a whole new language: Spanish. Through her newfound friend, Maria, Natalie learns how to say hello and goodbye, how to count to 10, the colors, foods, animals, and myriad other words and phrases in Spanish.

Performed by multi-Grammy Award winning singer Linda Ronstadt. Ronstadt, a Rock and Roll Hall of Fame inductee, was awarded the National Medal of Arts and Humanities by US President Barack Obama in 2014, where Obama honored her "one-of-a-kind voice" that paved the way for generations of women artists.

What listeners say about Spanish for Natalie