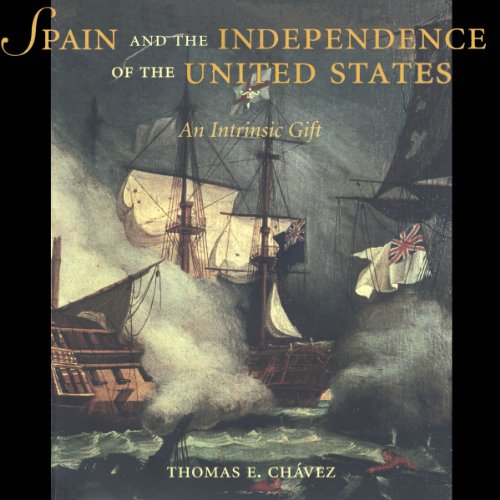 Spain and the Independence of the United States: An Intrinsic Gift

Spain and the Independence of the United States: An Intrinsic Gift

The role of Spain in the birth of the United States is a little known and little understood aspect of U.S. independence. Through actual fighting, provision of supplies, and money, Spain helped the young British colonies succeed in becoming an independent nation. Soldiers were recruited from all over the Spanish empire, from Spain itself and from throughout Spanish America. Many died fighting British soldiers and their allies in Central America, the Caribbean, along the Mississippi River from New Orleans to St. Louis and as far north as Michigan, along the Gulf Coast to Mobile and Pensacola, as well as in Europe.

Based on primary research in the archives of Spain, this book is about United States history at its very inception, placing the war in its broadest international context. In short, the information in this book should provide a clearer understanding of the independence of the United States, correct a longstanding omission in its history, and enrich its patrimony. It will appeal to anyone interested in the history of the Revolutionary War and in Spain's role in the development of the Americas.

"Chavez's book will become the launching point for most future research about his subject. . . it is a worthy contribution to the field." (Journal of American History)

"The sweep of this book and the depth of secondary and archival research on which it rests are impressive. Chavez succeeds in his goal of placing the North American aspects of the war into their full Atlantic-Caribbean context." (The Journal of Military History)

"The text is beautifully composed and highly exciting as a wide cast of fascinating historic figures spans the Americas, the Caribbean, Europe, and even North Africa in a high-stakes game that resulted in events that literally changed the face of the world. This is one of the most engaging and compelling historical works to come along in many years." (New York Resident)

"Chavez's excellent book adds a new dimension to the history of the American Revolution, one that gives Spain long overdue credit for its manifold contributions to American independece." (Southwestern Historical Quarterly)

This is a good explanation of an underappreciated contribution to American history. It highlights the global nature of the war that included the American Revolution and explains how fighting on the Mississippi and in Florida, Central America, the Caribbean and the Mediterranean contributed to American success by diluting British attention and resources.

One irksome aspect of the book was the continual reference to the US as colonies until the Treaty of Paris was signed. A more substantive issue is a tension between two central themes of the book. Chavez complains that Spain doesn’t get enough credit for helping foster American independence, while at the same time stressing that Spain got into the war only to serve its own interests. These two themes are not necessarily incompatible, but they should have been reconciled.

Chavez blames John Jay’s failed diplomatic mission to Spain and anti-Catholicism for Americans’ lack of appreciation of Spanish help. While the first reason may be valid, the second flies in the face of American recognition of French assistance. Other possible explanations include: (1) the very caution for which Chavez lauds Spain, (2) the facts that Spain didn’t have a dashing representative like Lafayette or a legend like Franklin to publicize its help, and (3) the effect of the subsequent revolutions in Spain’s colonies. The book does not address these questions.

The book does raise fascinating questions about the longer-term consequences of Spain’s involvement in the American Revolution, including the acceleration in the decline of French finances (Chavez argues that France refused to get involved in the war without promises of Spanish assistance), which helped lead to the French Revolution; the subsequent Napoleonic Wars, which helped spur the independence movements of Spain’s colonies; and American expansion across North America, at the expense of Spain (via France), in the case of Louisiana, and of Spain’s former colony Mexico, in the cases of Texas, New Mexico, Arizona and California.

The sound quality is inconsistent, and the narrator’s foreign accents are woeful.

A good story not usually covered in U.S. history survey classes. Why do the Spanish get Florida at the end of the American Revolution? The French hardly get a mention until they miraculously arrive at Yorktown, this book illustrates how the U.S. Revolution hinged on how Spanish involvement made the French involvement possible. A very good lesson on international power politics and national self-interest. Narration lacks inflection.

Yes. Really interesting subject. It is amazing how US History books don't mention Galvez and any american kid knows about Lafayette, who didn't do a tenth of what Galvez did for US independence

The reader constantly butchered Spanish names. It is quite difficult to understand him when he mention any Spanish name.

The information in this book is very interesting and gives a new perspective and depth on Spain's involvement in the American revolution. However, it is not an easy book to listen to. I wish I had bought the hardcopy and think I will have to do so in the end anyway. I need to be able to go back to reread certain details. Moreover, the narrator's pronunciation of Spanish names is so poor that I cannot even understand them. Then it becomes confusing as to who he is actually talking about. A narrator should be able to pronounce the names either in the language of origin or in the common pronunciation of the book. Neither is the case here.

very detailed, educational and enlightening. this