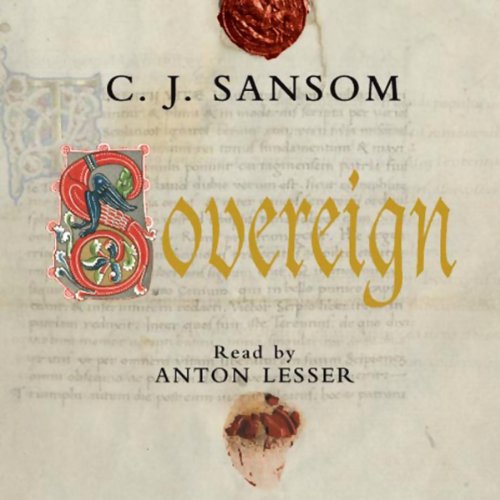 Autumn, 1541. Following the uncovering of a plot against his throne in Yorkshire, King Henry VIII has set out on a spectacular Progress to the North to overawe his rebellious subjects there. Accompanied by a thousand soldiers, the cream of the nobility, and his fifth wife, Catherine Howard, the king is to attend an extravagant submission of the local gentry at York.

Already in the city are lawyer Matthew Shardlake and his assistant, Jack Barak. As well as assisting with the legal work of processing petitions to the king, Shardlake has reluctantly undertaken a special mission: to ensure the welfare of an important but dangerous conspirator being returned to London for interrogation.

But the murder of a local glazier involves Shardlake in deeper mysteries, connected not only to the prisoner in York Castle but to the royal family itself. As the king and the Great Progress arrive in the city, Barak stumbles upon a terrifying secret, and a chain of events unfolds that will lead Shardlake to the most terrifying fate a subject of Henry VIII can fear: his own imprisonment in the Tower of London.

"Anton Lesser performs with marvellous versatility, helped by Sansom's sure touch for voicing telling detail with simple directness." (The Times)

What listeners say about Sovereign

This is a wonderful series set in Tudor England. Sansom captures exactly the right mix of historical authenticity and modern sensibility. The narrator is fantastic. I love his voice and he does a wonderful job of conveying character with subtlety.

Well written and narrated, with an entertaining plot, the book falls a bit short of great. I like a richer historical context, or more character development, but I recommend it.

Well worth a listen for history or crime fans

I have read "Dark Fire" by C J Sansom and thoroughly enjoyed it, so thought I would try listening to "Sovereign." It is an excellent book, and although I am not an expert, it feels historically accurate. I always enjoy descriptions of the minutiae of life in Tudor times, and C J Sansom has a real art with this. Whilst some parts are gruesome, this is a reflection of the time, so relevant and not gratuitous. The character of Shardlake is well drawn and the twists in the tale keep you guessing. Until I started listening to audio books I had not realised what a difference a reader can make to the story, and Anton Lesser's voice is perfect for the topic. I would recommend this to anyone who is interested in Tudor history or likes a good crime novel,

Really enjoyed it, with audible books the narrator is so important, Lesser brings the characters alive.

My husband and I listened to this on a journey and time passed so quickly we couldn't believe it when we arrived. An enthralling story. We really enjoyed it.

Poor Matthew Shardlake is forced by Cranmer to go north to meet up with the Procession of Henry VIII and his unfortunate queen of the moment, Catherine Howard. Henry is to accept the homage of the northern lords after a failed northern uprising is brutally supressed. Shardlake and Barrak, his clerk, are to go to York to meet up with the royal procession, review petitions and to see that a rebel prisoner is brought safely back to London for questioning. The task is complicated by attempts on his life and on the life of the prisoner.

The plot is gripping and the detail about the politics of time is enlightening. The feeling of the uncertainty and cheapness of life in Henry's reign is shown as well as that of the people of the court who may rise and fall on a whim of an irascible monarch.

Brilliantly read by Anton Lesser who brings all the characters to life. This is another of the excellent books in the series by CJ Samson about Matthew Shardlake, the reign of Henry VIIIth and the beginning of the English Protestant movement.

Anton Lesser is a talented and delightful narrator, C J Sansom's Matthew Shardlake is a delight as ever and the plot is absorbing and interesting.

The Shardlake series continues to deliver with medieval who dunnit mixed with spectacular historical atmosphere. It won't disappoint.

Love the narration by Anton Lesser. I hope he can be persuaded to complete the whole series. Fantastic book

A great story with real characters A great listen calling to mind the bleak beauty of Holme and the strength that is Yorkshire.

I could listen to Anton Lesser all day, every day. His narration voice is an easy listen, while his range of voices and accents for the various characters are well thought out and credible. This brings a long and quite convoluted plot to life and makes it easy to follow. Il be looking for another of his Shardlake narrations, to go with this one, and his Falco character in the Lindsey Davies books.

Great story which transports you back in time. Ready for the next book in the series.

I had read the previous two books in this amazing series. Being a fan of Anton Lesser I decided to give the audible version of book 3 a go. However, I have to say that even though I enjoyed what I listened too, so much of C J Samson’s wonderful scene building and character development was lost in this massively abridged version of Sovereign. Therefore, I will be returning to the physical book for instalment number 4 of Matthew Shardlake’s adventures