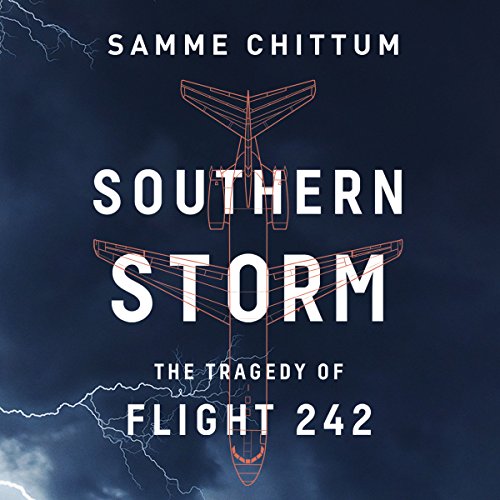 By: Samme Chittum
Narrated by: Keith Sellon-Wright
Try for $0.00

On the afternoon of April 4, 1977, Georgia housewife Sadie Burkhalter Hurst looked out her front door to see a frantic stranger running toward her, his clothes ablaze, and, behind him, the mangled fuselage of a passenger plane that had just crashed in her yard.

The plane, a Southern Airways DC-9-31, had been carrying 81 passengers and four crew members en route to Atlanta when it entered a massive thunderstorm cell that turned into a dangerous cocktail of rain, hail, and lightning. Forced down onto a highway, the plane cut a swath of devastation through the small town of New Hope, breaking apart and killing bystanders on the ground before coming to rest in Hurst's front yard.

Ultimately, only 22 people survived, and urgent questions immediately arose: What caused the pilots to fly into the storm instead of away from it? Could the crash have been prevented? Southern Storm addresses these issues and more, offering an insider's look at this disaster and the systemic overhauls that followed it.

What listeners say about Southern Storm

I found this book hard to put down. Samme is a good writer and I look forward to more of her books. I can not imagine the research that went into compiling this true story. And Keith was a pleasure to listen to. So often a reader can ruin a story. Not Keith. Thanks for a good story and a pleasant one to listen to.

An excellent account of detailing the events that took place not only the survivors but those in the surrounding community. The pilots were given a lot to process in a short amount of time with little to no assistance from the air traffic controller. The author captures the unforeseen weakening and breaks in the "safety chain".

a bit repetitive, but does well fleshing out all the individuals involved in the crash

I was hoping for a thorough analysis of the factors that led to the crash, the investigation, and changes that were made afterward. While that was touched on, the focus is on the experiences of those involved in the accident.

I thoroughly enjoyed every minute of this book. The narrator was exceptional, very well-spoken. This was wonderfully written, I highly recommend it.