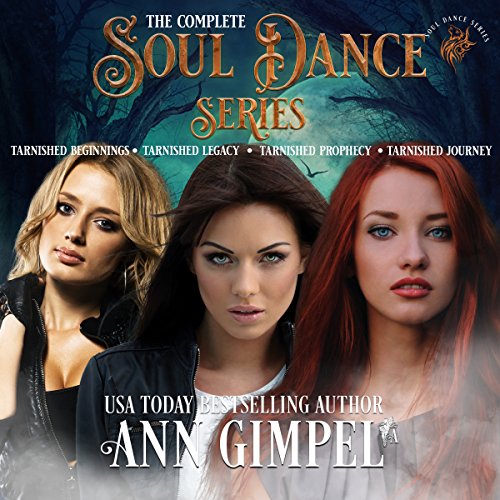 A saga that sweeps from 1700's Egypt to Nazi Germany. Shifters and Romani hate each other, but they hate vampires more. Maybe it's time to forge a new alliance.

Tairin Jabari was born in a caravan and has always believed she's Romani. Why wouldn't she? Her mother and father never suggested otherwise. The Rom have harsh rules. When Tairin's first shift catches her unaware at 13, her father disappears, and the elders move with deadly speed to punish her mother for mating outside the blood.

Half Romani, Tairin's no stranger to hiding her mixed blood from gypsy caravans. What she can't hide is her perpetual youth, courtesy of her shifter heritage. Every few years, she drops out of sight, resurfacing in a new country to join a caravan where no one knows her. She's overstayed her welcome where she is, but Germany is at war, and travel has become all but impossible for everyone targeted by the Reich.

Magic runs strong in Ilona, a gypsy seer. Powerful ability isn't valued in Romani women, so she focuses her fortunetelling on inconsequential details. Nothing that could come back to haunt her caravan if a prediction went bad. Rounded up and dumped in Dachau prison camp, she has plenty of time to rue her decision to downplay her ability. If she'd taken the time to scry her own future, she'd still be free.

Long before Germany rounded up Romani and sent them to prison camps, the Netherlands declared them undesirables. Yara's caravan disbanded when she was 15 to avoid being driven out of the country. Ten years have passed, and she's been alone for most of that time hiding in caves and abandoned buildings. It's been a lonely life, but at least she still has one.

What listeners say about Soul Dance

Book 1: Tarnished Beginnings
A young gypsy girl, finds out that she a wolf shifter, born of a gypsy mother and a wolf shifter father. Unfortunately, neither of her parents' clans want anything to do with her, as she is treated as a half caste, and she is left to the fates in ancient Egypt.
An interesting tale.

Tairin's journey continues, 200 years since we last heard of her plight in book 1. She has been traveling with the Romani again, but keeping her Shifter side a secret. Nazi Germany is their current location, and she, with a sympathetic Mage is h3ll bent in causing as much strife as possible in the Nazi strongholds. However, their plans are quickly changed, when they happen across a nest of Vampires.
It will take the Romani and Shifters, working together, to eradicate the Vampire nest.
There is drama and dread afoot, especially for Tairin and Elliott. I won’t reveal more, but it is a very action packed book, and an excellent tale.

The story continues, with Elliott, Jamal and Tairin moving with two caravans into hiding. They chance across a Rom woman, escaped from the Nazi prison camp. Jamal is attracted to her, but again the Rom-Shifter relationship ban stood in their way.
More drama and action occurs, fighting and killing Nazi guards and Vampires, wherever possible.
Will they survive the Nazi regime??
It is a great story, and I don't want to spoil it on you.

The final book in the series, tying up and completing the tale of the magical connotation of Hitler's evil rise to power.
As all books do, we have a love story, between Stewart, one of the Caravan Leaders and a young woman, with whom we haven't met, until this episod. Under the escape from Germany, traveling through Netherlands and the crossing of the North sea, to Scotland, we have a band of shifters and Rom gypsies fighting demons and conversing with Gods, to ensure that they are present when the ultimate good versus evil battle begins.