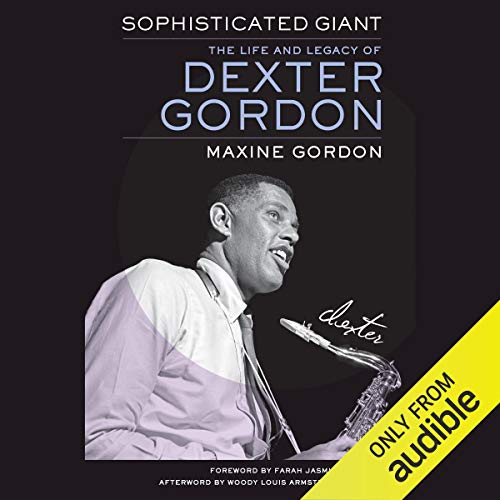 Sophisticated Giant presents the life and legacy of tenor saxophonist Dexter Gordon (1923-1990), one of the major innovators of modern jazz. In a context of biography, history, and memoir, Maxine Gordon has completed the book that her late husband began, weaving his “solo” turns with her voice and a chorus of voices from past and present. Reading like a jazz composition, the blend of research, anecdote, and a selection of Dexter’s personal letters reflects his colorful life and legendary times. It is clear why the celebrated trumpet genius Dizzy Gillespie said to Dexter, “Man, you ought to leave your karma to science.”

Dexter Gordon the icon is the Dexter beloved and celebrated on albums, on film, and in jazz lore - even in a street named for him in Copenhagen. But this image of the cool jazzman fails to come to terms with the multidimensional man full of humor and wisdom, a figure who struggled to reconcile being both a creative outsider who broke the rules and a comforting insider who was a son, father, husband, and world citizen. This essential book is an attempt to fill in the gaps created by our misperceptions as well as the gaps left by Dexter himself.

What listeners say about Sophisticated Giant

Really enjoyable and touching read. The writer's prose makes you emotionally connect to the characters and time period. The narration is absolutely first class, I can't wait to hear more from Terria Joseph and Joe Morton. The narrators' voices and cadences are well mated to the prose and Terria Joseph has one of those voices that oozes kindness. One of the things I like about jazz biographies are the side stories about other jazz musicians, being steeped deeply in the jazz world, the author has an abundance of these stories from her own direct experience, from what was narrated to her by Dexter himself, and her own research (which I note was a remarkable amount).

Overall, this is a sympathetic treatment of Dexter's life while being open about his flaws and failures (of which there are many). I would have liked to have gotten more details around Dexter's relationship with his other children, but I understand the sensitivity/privacy issues around these details, especially as this work has been written by Dexter's widow.

This is certainly highly recommended reading for jazz fans; you get the previously mentioned side stories about other musicians and I really appreciated the intricate details on recording contracts and the paltry sums these musicians received for their work. As a Blue Note fanatic, I relished the details on Dexter's professional/personal relationship with Alfred Lion and Francis Wolf. I also enjoy finding out what jazz musicians thought of the musicianship and playing chops of their fellow musicians.

To conclude, you walk away from this book having a good feel of not just Dexter Gordon's personality but Maxine Gordon's (the author) as well; you have a front row seat to Dexter's growth as a human being; you gain a better understanding of the lifestyle (good and bad) of jazz musicians; you discover new artists whose music you should be exploring (in my case Ike Quebec), and you also discover new narrators to follow on audible.

This book is a beautiful addition to the jazz biography canon and I really hope many people take a chance to read/listen to it.

One of the best!!

Mrs. Gordon, THANK YOU!
This was one of the best bios I have ever read about an artist. Totally loved all the references and detail on sessions, people, and Mr. Gordon's highs and lows. I may have to listen again and order the book for the photos!! I pulled out my documentaries on Miles and 'Trane to watch for the umpteenth time along with 'Round Midnight. Enjoy everyone and stay safe!!! -TGH

Great on Dexter - needs editing down, I think

My ratings are a bit harsh because I really enjoyed this book and the reading. But I’d have preferred the author herself as the main narrator for the audio book. This reader couldn’t convey the feelings convincingly, I felt.

Also the text could do with some editing- quite a bit of repetition, the introduction in particular goes on and on without getting to the story for too long. The author’s son’s afterword is obviously heartfelt, but it’d be best as a private letter to his mom - I don’t want to sound mean, but it’s overwritten and is extraneous here.

I’m picking fault though - I’ll probably buy the paper book at some point and read it again. I liked it.