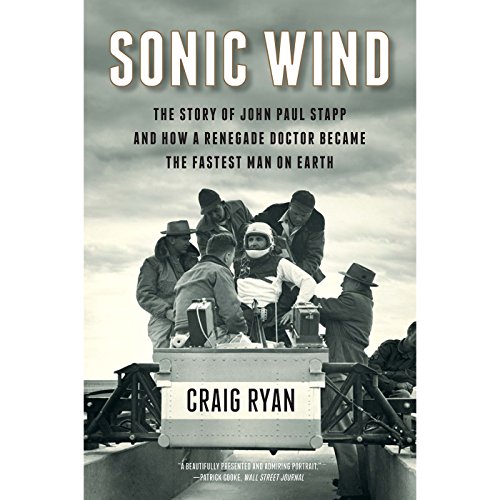 The Story of John Paul Stapp and How a Renegade Doctor Became the Fastest Man on Earth
By: Craig Ryan
Narrated by: Christopher Grove
Length: 15 hrs and 37 mins
Categories: History, American
5 out of 5 stars 5.0 (7 ratings)

Sixty years ago cars and airplanes were still death traps waiting to happen. Today both are safer than ever, thanks in part to one pioneering air force doctor's research on seatbelts and ejection seats. The exploits of John Paul Stapp (1910-1999) come to thrilling life in this biography of a Renaissance man who was once blasted - faster than a .45 caliber bullet - across the desert in his Sonic Wind rocket sled, only to be slammed to a stop in barely a second. The experiment put him on the cover of Time magazine and allowed his swashbuckling team to gather the data needed to revolutionize automobile and aircraft design. But Stapp didn't stop there. From the legendary high-altitude balloon tests that ensued to the ferocious battles for car safety legislation, Craig Ryan's book is as much a history of America's transition into the Jet Age as it is a biography of the man who got us there safely.