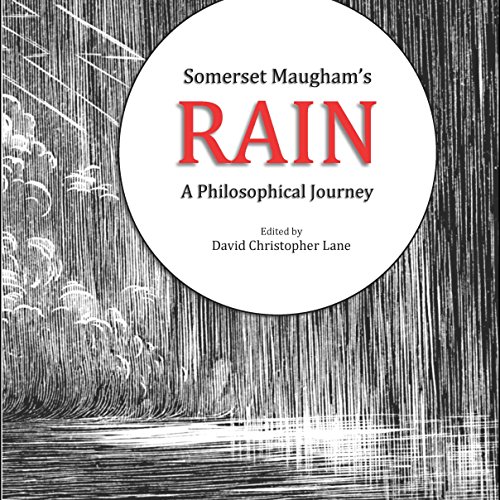 By: David Christopher Lane
Narrated by: Christy Williams
Try for $0.00

Many critics consider "Rain" to be Maugham's finest short story and it has proven to be wildly successful for an essay that is less than 16,000 words, eventually earning him over a million dollars. What makes the story standout, besides its exotic setting in the South Pacific, is the archetypal conflict between the pull of the flesh and the pull of the spirit. This is brought to dramatic effect by the juxtaposition of a Christian missionary's disdain for a prostitute who he attempts to convert but whom he ends up sleeping with, thus highlighting his own duplicity. The metaphor of the ceaseless rain, according to one critic, is that it represents an over-determined fate, where there is "simply no escape from what is pre-ordained and nature must take sit course". This book contains the original short story by Maugham as well as a brief introduction explaining why the story echoes Nietzsche's views on the upside down world of moral values.

One of Maugham's most widely read stories illustrating well the collisions of cultures, ethnics, imposed expectations, hypocrisy, and pride. Human nature and the better parts of humanity often have extremes that when overplayed have tragic and unintended consequences. This story explores the conflict of wills, the results of poor decisions, and the injustice of irreligious judging. Told well too is the impropriety of imposing one's beliefs upon others by force and manipulation, while underestimating human weaknesses in ourselves and others. Lots here to examine.

Audible's narration adds personality and to this story of power, control, and human weakness amid fear, misgivings, and prideful arrogance.