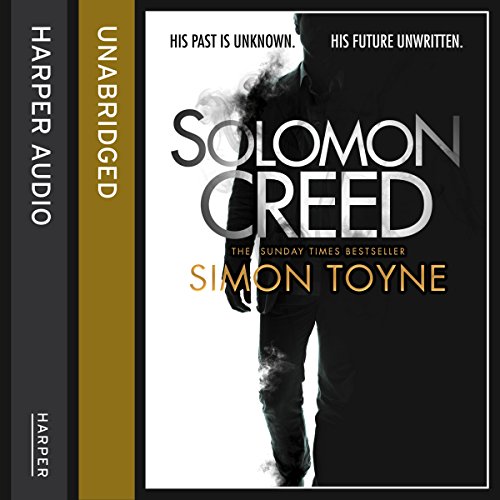 By: Simon Toyne
Narrated by: Joseph Balderrama
Try for $0.00

Who is Solomon Creed?

A plane crash in the Arizona desert. An explosion that sets the world on fire. A damning pact to hide an appalling secret. And one man bound to expose the truth. He is Solomon Creed.

No one knows what he is capable of. Not even him. When Solomon Creed flees the burning wreckage of a plane in the Arizona desert, seconds before an explosion sets the world alight, he is acting on instinct alone. He has no memory of his past and no idea what his future holds.

Running towards a nearby town, one name fires in his mind - James Coronado. Somehow, Solomon knows, he must save this man. But how do you save a man who is already dead?

"Among the best current thrillers." ( Sunday Express)
"A cool, confident debut...with pace, grace and a keen eye for cinematic effect." ( Daily Telegraph)
"Intriguing and engaging.... Relentless pace. An exciting and interesting read. I look forward to returning to Ruin, where there are plenty of stories waiting to be told." The Sun)
"High concept, debut conspiracy thrillers don't come with higher expectations than this. Hard to think of it as a debut, better to think of it as the beginning of a massive new adventure, and a so-long to Dan Brown." ( Mirror)
"A fast moving, thoroughly enjoyable, adventure - plenty of action, plenty of intrigue and a wonderfully imaginative reinterpretation of a slice of religious history. The sort of novel to devour in one sitting." (Kate Mosse)

What listeners say about Solomon Creed

Brilliant story and an astounding performance

Simon Toyne weaves brilliant storylines in all his works. He is one of those authors whose books you just buy because it wont disappoint.
Joseph Balderrama, Dude you are truly awesome. You make the book come alive. One cannot help but float away in the story line.

Toyne has done it again

I have read Simon Toyne before and once again he has kept me glued to the story the twists and turns have held my attention . The narrator did a great job thank you audible

Haven't quite finished this yet but want to get my review out asap to encourage you to try this.
It's kind of Jack Reacher meets Stephen King and I'm enjoying it immensely. Will certainly be checking out Toyne's previous novels.
Don't want to finish this and can't wait to finish this, both at the same time if you know what I mean...
Terrific narration by Joseph Balderrama in a variety of accents.

I have mixed feelings about this cross genre oddity. It has atmosphere, tension, pace and plenty of action so there's a lot to commend it. Some irritating accents and plodding back story grated on me and it was, for me, longer than needed. I also love thrillers more than horror and mysticism but I am certain that for many listeners it will surely hit the spot. Go in knowing what it is and you won't be disappointed.

I would recommend this book, I wanted to know where it was heading and having read previous Simon Toyne books I read and listened to this one

The story is really good, I hate doing reviews as I don't like to give things away, I hate that if it happens to me but rest assured it is a feel good book, my heart raced at times too

A good listen in this case too, the narrator was not irritating

Solomon Creed, as you listen to the story it becomes apparent why

Have you listened to any of Joseph Balderrama’s other performances? How does this one compare?

Not that I know of
I enjoyed his reading

Would you listen to Solomon Creed again? Why?

The story was a roller coaster of a ride. If I was talented enough to write a book this is the book I would have liked to have written.

What was one of the most memorable moments of Solomon Creed?

The desert scene when JC finds the mirror and looks into it.

Not that kind of book.

Looking forward to the second installment.

I really wanted to love this book

Would you try another book written by Simon Toyne or narrated by Joseph Balderrama?

I would, and have listened other Simon Toyne books and this does compare favourably.

It did very much leave the door open for the next instalment and in some ways I would have preferred to have waited for the next one to be released.

Would you listen to another book narrated by Joseph Balderrama?

Yes, he was consistent throughout.

The narrator is brilliant as well as the story
Even stopped me from binge watching Netflix
I'm so often disappointed in audible books as the narrator is often poor, but it's not the case here. Worth a listen

I've read the actual books, but loved listening to them too. The narrator is excellent. The story is brilliant, would recommend the series, this is the first.

Bought it as it claimed to be like 'I Am Pilgrim' badly written with really boring sub story. Very male. I didn't finish but not one female character lead. Lot's of gory detail about burn victims. Very poor.

Really enjoyed Simons other books and this one doesn't disappoint. Excellent narration. Can't wait for the next book