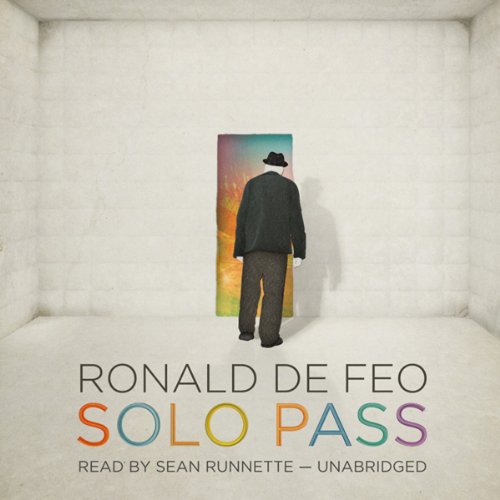 This is a dark yet often funny novel told from the point of view of a man who for the past two months has been a patient at a New York City mental ward. Having suffered a breakdown—due to his shattered marriage and an irrational fear of fading away as a human—he now finds himself caught between two worlds, neither of which is a place of comfort or fulfillment: the world of the ward, where abnormality and an odd sort of freedom reign, and the outside world, where convention and restrictive behavior rule. Finally on his way to becoming reasonably "normal" again, he requests and is granted a "solo pass", which allows him to leave the locked ward for several hours and visit the city, with the promise that he will return to the hospital by evening.

As he prepares for his excursion, we get a picture of the ward he will temporarily leave behind—the staff and the patients, notably Mandy Reed, a schizophrenic and nymphomaniac who has become his closest friend there.

Solo Pass is an unsettling satire that depicts, with inverted logic, the difficulties of madness and normalcy.

Would you recommend Solo Pass to your friends? Why or why not?

Yes if they were in the mood for a pensive, brooding, slow and SAD story about an aggressive and unlikeable man who was temporarily placed in an institution for his inability to function in a world around him.
NOT if they wanted a relaxing read. I kept catching myself being tremendously angry at the main character and (SPOILER) his inability to recuperate and work on his flaws of character. Yes, there's no catharsis of any sort at the end. The guy is a blatant sociopath who does not even try to fix or explain his infinite contempt for all that comprise his world. And NO, other characters nor their lives are NOT funny at all. They weren't meant to be funny or dear, despite what the book's summary says. They're just sad and damaged.
The book has an amazing potential but it's really hard to love it.

Have you listened to any of Sean Runnette’s other performances before? How does this one compare?

I haven't listened to Mr. Runnette before. He has a deep, mature voice which is pleasing to listen to but I cannot discern whether he deliberately read this book to give it an air of despair or not. He did a great job if he did. He excellently conveyed the flat, uninterested tone of a depressive.

Definitely ANGER. At whomever placed this book under 'Humor' in 'Fiction' department. This is primarily Audible's mistake.