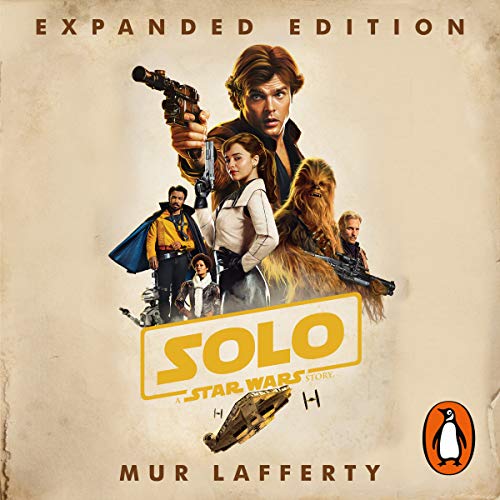 By: Mur Lafferty
Narrated by: Marc Thompson
Try for $0.00

This thrilling adaptation of Solo: A Star Wars Story expands on the film to include scenes from alternate versions of the script and other additional content, giving deeper insights into Han Solo’s years in the Imperial Navy, Qi’ra’s past, and the beginnings of the rebellion.

Though Han Solo has thrilled Star Wars fans for decades, the notorious wisecracking scoundrel was chasing adventure and dodging trouble long before he walked into the cantina at Mos Eisley spaceport.

Young Han dreams of someday soaring into space at the helm of his own starship and leaving his home, the gritty industrial planet Corellia, far behind. But as long as he’s trapped in a life of poverty and crime - and under the thumb of the sinister Lady Proxima and her brutal street gang - reaching the distant stars seems impossible. When Han tries to escape with his girlfriend and partner in crime, Qi’ra, he makes it out - but she doesn’t. Desperate for a way to find his own off world vessel and free her, Han enlists in the Imperial Navy - the last place for a rebellious loner who doesn’t play well with others.

When the Empire clips his wings, Han goes rogue and plunges into the shady world of smugglers, gamblers, and con artists. There he meets the charming and cunning high roller Lando Calrissian, makes an unlikely friend in a cantankerous Wookiee called Chewbacca and first lays eyes on the Millennium Falcon. To snag his piece of the outlaw pie, Han joins a crew of pirates to pull off a risky heist. The stakes are high, the danger is great, and the odds are slim. But never tell Han Solo the odds.

What listeners say about Solo: A Star Wars Story

Mur Lafferty is an exciting writer, with well thought out stories, and the ability to draw you in, and leave you totally captivated by the story. Six Wakes, her debut novel, was exceptional, so when I heard she was writing an expanded version of Solo – A Star Wars Story, I was super excited, and I wasn’t disappointed with the result. Lafferty delivered a story that was not only true to the film, but for those Star Wars fans, and those that like to have a bit extra from a ‘Film to Book’ conversion, she gave us all that bit extra that we so desperately crave, including expanding on Han’s time at the Academy, expanding on the relationship between Lando and Chewie, expanding on the Crimson Dawn themes, as well as the history of both Han and Qi’ra.
The great thing about the written version of the story is that it allows the Author to give so much more depth to a particular scene, and Lafferty took the opportunity to do this with important scenes and parts of the story, not going overboard as some authors do. Without giving away any real spoilers (Assuming you have seen the movie), Lafferty took scenes such as Han and Chewie’s first meeting in the mud pit, and gave it so much extra depth. It was a powerful part of the movie for Star Wars fans, but it is even better in the book.
There are some hilarious follow-ups (as mentioned), with Lando and Chewie and how to properly clean a Wookie that are priceless.
Other aspects that converted so much better in the written word are the various references to Crimson Dawn, which Lafferty has given additional depth to, the martial art’s style Teräs Käsi, as well as all the locations that they visit in the story. Characters such as Bossk and Aurra Sing who are passing references in the movie get a bit more in the book.
This is not just the expanded release, with the extras that made the cutting room floor, and some extras from Lafferty to give the book even more flair, this is where books and films differ, in that when done right, a book can tell the same story, but tell it so much better, with so much extra depth, and all the extra nuance that you just can’t capture on the big screen.
This is probably one of the best film to book adaptions I have read so far for the Star Wars Universe. This was a fun tale of the introduction of Han as a Smuggler, how he got started, his background at the Imperial Academy, but it goes deeper than that. We see how he started out as a Slumrat, on Corellia, and how he rose up, how he had been in love before, and ultimately betrayed. There is the Wookie Life Debt between He and Chewbacca and the start of their friendship. We also see that although he is a smuggler, a scoundrel, that deep down, he is capable of doing the right thing, and that later, this will lead him to helping the Rebellion (Even if it is for the money and to impress the Princess)
This is the story that starts the Legacy of Han Solo, and it is done exceptionally well, this is a must read for any Star Wars Fan, anyone looking for a bit extra from the movie, or just a good read.
The Narration was outstanding, as we have come to expect from Marc Thompson. With full sound effects, an exceptional array of voices, the Audible versions of Star Wars stories have gone to every effort to give you a fully captivating story, allowing you to not only enjoy the story, but really get fully immersed in the experience and get carried away to a galaxy far far away for a few hours.
With a story that is a lot of fun, and sensationally written, the Narrator has provided an extraordinary performance (as he always does), to make this well worth the listen.
Star Wars books being released on Audible have gone that extra step to really provide a full experience when listening, and they are setting the standard for sound effects and background music etc. Marc Thompson as the Narrator is just brilliant in his work to add to this experience.
If you are a Star Wars Fan – this is a must listen. For everyone else, this is well worth the listen for anyone who likes a good Sci-Fi story!

Great adaptation of a good movie

There's virtually nothing to dislike in this book. I loved it from beginning to end.

better than with film!

give more context to the story and also helps with where solo is based in the star wars story line. great listen

This is a great adaptation of the movie. It gives real depth too the characters and the story. fans of the film will not be disappointed with the performance. the only let down is the sound of Chewbacca. instead of using sound bites from the films the narrator does a poor imitation. A minor for an otherwise good job.

great fun and fills in some of the blanks

loved the film, loved the book. Well worth a listen and helps to flesh out all of the characters.

I absolutely loved this expanded edition of Solo it offers a ton more info with extra character developments and adds to the story in every way possible and I have to mention the end with no spoilers that ties into another Star Wars movie, which for me was a huge shame that it never made into the film... give it a go! It’s a great listen, all about our beloved One and only Rogue smuggler... Han Solo

you've seen the film now listen to the full story and the bits you won't find in the director's cut AWESOME!!!!!!!!

Really enjoyed listenimg to the narration, and character voices are excellent. Would recommend to anyone who enjoyed the movie.

I loved this audio book very much and I want more like these in the future. Thank you Marc Thompson for Narrating audio book.
By Orkneyislands

Not a bad story

Decent version of the film. Worked well and well read by the narrator. Music very good and not too distracting.

Better than the film

much better than the film

I seriously enjoyed this book so much more than the film, its padded out in all the right places. I especially enjoyed the cameo during the epilogue (not maul) and wish it featured in the film.

marc thompson does an amazing job as always.

it was a great build on the movie, and performed well with voices true to the movie.
loved the little extra background story

As good as the movie and with extra sections that really add a lot to the story. Shame the movie did not end the same way as the book, but this makes the book well worth listenning too, because I am not going to say here what the ending is.

Super awesome. I loved it! Definitely worth buying. Mr. Thompson does a great job of narrating and he makes the story feel so real! Definitely buy this book!!

I wanted to read this book to get all the 'expanded' information, having seen the film. I enjoyed the book. Most Wanted was decidedly Qi'ra's story and this is Han's. This is so much better than the film and would highly recommend it if you enjoyed the film. And the ending ... I can't say much, but wow it was perfect, especially if you read chronologically like me.

However, there were some contradictions with Most Wanted (the novel that proceeds this story).