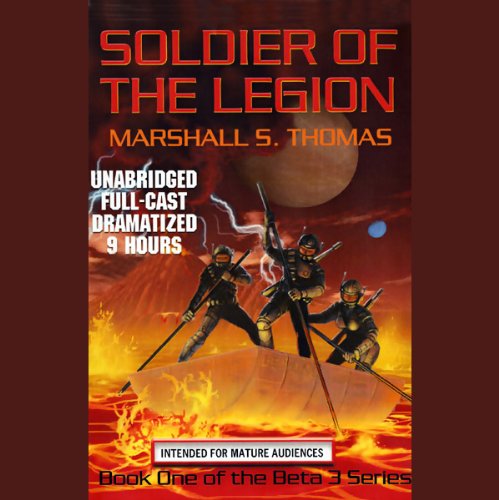 Soldier of the Legion

Soldier of the Legion

A rough truce divides the known galaxy between the System, the despotic slave empire that rules the inner systems, and the Confederation of Free Worlds. The ConFree is defended by the Legion. Beta Three, call sign Thinker, like so many young fools before him, joined the Legion after the love of his life walked out. Fresh from the boot camp called Planet Hell, Thinker's unit is called to defend a remote ConFree world from a mysterious System incursion. The Legion doesn't negotiate with slavers, even if it means another costly war.

He and the rest of the fearless Legion will soon discover that giant exosegs, slavers, and systies are just the beginning. Once before, the Legion faced the godlike, utterly alien and evil, Omnis, and drove them back at the cost of billions of lives. The future of humanity, all humanity, even the corrupt and decaying System empire, will soon be in the hands of soldiers of the Legion.

Thinker is only just beginning to comprehend the depth of his insanity.

Read by Bill Sebastian and a full cast.

PRODUCTION :
This Audiobook is an "enhanced" reading/narration (main narrator with supplemental character qyotes supplied by other voice talent as opposed to an actual Audio "play" (much like Simon&Schuster StarTrek books)
The main narrator is OK a little dry, the others are wooden or play character voices "over the top" and silly.

STORY :
The story is a butch homage to Starship Troopers
in fatuated with military technology, but little of the political theory of it's conceptual godparent.

The piece also has an adolscent sexual fixation on female chacters...obsessing about their legs or undergarments for no story purpose

While not terrbile (I was looking for bubblegum, not literature), in the end I found it directionless and somewhat dissatisfying

From looking at the other reviews, it's apparent this book isn't for everyone. Granted, it lacks the political depth of Starship Troopers but I don't think the comparison is fair. This book has you tagging along with a group of soldiers, day in and day out, and it's not much more than that. I found the battle descriptions quite exciting and vivid. This doesn't make it a bad book, but it may not be your cup of tea. There are not many deep discussions on any topic because the solders are there to fight not talk. If you're a fan of sci-fi action-war novels you'll probably enjoy this book, as I did. I'm looking forward to the next book in the series.

No, it's not the "great American novel," but it does what it intends to do. Tell a war story in space. Some have compared it to Starship Trooper without political depth. I don't think that's what the author had in mind. I listen to Audible books during my commute and I love SciFi/Fantasy BECAUSE I don't have to concentrate on the "political" issues or the story's socially redeaming qualities. It's FANTASY....it's imagination... it's fun!!

From other reviews, it's obvious that some people have drastically different tastes... Perhaps they'd prefer something along the lines of "Bridges of Madison County" and leave the Sci Fi Action adventure to those of us who enjoy it... This story rocks from one end to the other. Great sound effects, great imagry, great action. It's story is not complex, so Shakespeare fans, please look elsewhere. It's all action from the start to finish. It's all done as as if it were a war report from a soldier to a reporter, so the soldier sounds a little monotone, but he's supposed to be. The weapon imagry and the descriptions of weapons fire is awsome... If you like this, you'll also be the type who likes Bill Baldwins "The Helmsman" series done by the some of the same cast and uses many of the same sound effects that seem to the the trademark of Timberwolf Press.

Great book but Audible doesn't have book 2 thru 6

Great book, Audible does not have the other 5 books in the series, big disappointment as 1st book ends on cliff hanger..

Move along, nothing to hear here

The book is written for a 10yr old. Every couple of minutes you'll hear a line so bad that it just makes you groan with pain. The audio production is as bad. It's ok for the protagonist to sound dull in a military novel, that's kinda stoic. The problem is the portrayal of all the secondary characters. Their parts are delivered with the rapid rehearsed sing-song delivery of an infomercial. It's hard to understand what the production director was thinking. Could it have been a friendly contest to see who could deliver the most awful work?

I doggedly made it halfway thru, but as the protagonist's chick problems became more severe, as a 4th grader might see the world of romantic entanglements anyhow, I just couldn't take it any more. Nothing was worth the torture. So the second half went unheard.

I enjoyed most of the actors' performances, and the story is a blast. I hope there will be a sequel, because this ends on a cliffhanger. This was a great listen while driving between my work and my home, some 200 miles apart. I didn't mind the two-dimensional villains, and found I could just accept whatever alternating silliness and quasi-profundity the author chose to throw at me. The names of the characters are a blast, too: Thinker, Priestess, Psycho, Valkyrie. If you liked the performances of The Helmsman and Galactic Convoy, you'll likely get a kick out of Soldier of the Legion.
PS. I followed this up with The Great Age of Discovery - another bunch of crazies running around tearing everybody else up!

ONE HELL OF A BOOK

This book has to be one of my favorite aduio books. The narration is fantastic and will keep you in suspense if you are a SCI-FI buff.

It has action, and romance that will make you put your ear piece close to your ear, rewind the book so that you do not miss a thing and turn up the volume.

Another comparable audio book is A Small Percentage.

I just wish Auduble had more from the same author.

A great read can't wait for the continuous

I really enjoyed this book I gues mainly because of how different it was from my usual reading. And how well it was read very intresting and involving story about the life of a soldier I really enjoyed it, wish it would have been longer.

Fantastic book but even better perfomrance

Where does Soldier of the Legion rank among all the audiobooks you’ve listened to so far?

It is one of 2 books of all time that i have fallen in love especially the production.

I am pasting this here as I wrote it vie e-mail to the author to let him know how much i liked his work. I realize that it is actually a valid review of the audio book so here goes as taken from my e-mail.:

"I listened to your book Soldier of the Legion a couple of months ago, on an impulsive urge to try something new, and I thought it is an absolutely fantastic book. I loved the universe you have created and the distinct characters you have portrayed. I am a big sci-fan in all of its forms but I have to say that the Audio book being in a performance form made my hair stand almost all the time while I was listening.

I have to say I have listened to ridiculous amounts of audio books while driving for 3 hours every day in heavy traffic with nothing better to do but there are only two books I have listened with such intensity that I could feel shivers travel through my body as if i am experience the fictional reality myself. So far I have listened to the performance of Soldier of the Legion 3 times and every time it has the same effect on me as if it was the first time, incredible connection with the action, palpable feeling that I am experiencing first hand what is going on it is absolutely astounding.

I am not sure how the audio version of the book was created but the producer and cast that gave it life in my humble opinion are meant to be doing this. I was amazed at the amazing attention to detail throughout the whole production, sure the big bangs and explosions were nice and the shooting sound effects were excellent but I wanted to to share my awe of the little things:

* The fit of the voice performing the character where I feel that the actor or actress sounds exactly as how I would imagine the fictional character would sound in real life based on her description. The intonation and inflection subtleties executed flawlessly by the cast was astounding.

* The clever use of simulated environments e.g. suit radio transmissions etc. which add another level to my experience ...

All of these little details chapter after chapter immersed me deeper and deeper into the experience of your book up to the point where I found myself subconsciously chanting the legion's prayer as they are about to go into battle. I have the urge to listen to the book again just thinking about it it is absolutely fantastic feat of creativity and quality."

Not a great listen

I did not enjoy this book. There was minimal character development. It was like a poor comic book story Narration was ok

This is one of those rare sci-fi books that grabs you by the throat and won't let go as it takes you on a ride that is so beleivable that its chilling. The sentences are at time so short it leaves no fat and is pure descriptive narative. That imprints on your mind exactly what is ment to be convayed, this is a rare experiance indeed as not many sc-fi books reach those hights. A excellent listen of a book so well written and read it is begging for more of the same. It looks like that won't happen anytime soon though,a crying shame. I hope you enjoy it as much as i did. I highly recomend.