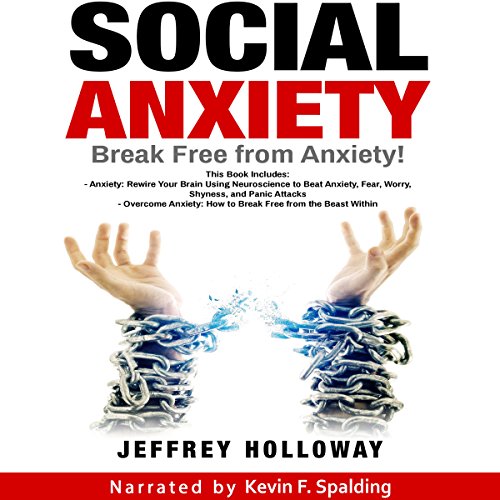 By: Jeffrey Holloway
Narrated by: Kevin F. Spalding
Try for $0.00

Social anxiety disorder is the third largest psychological problem in the United States today. Millions of people quietly endure this pain every day.

This book includes two manuscripts designed to help those in their fight against their anxiety.

Use developments in neuroscience to rewire your brain and free yourself from the chains of anxiety, shyness and panic attacks.

If anxiety dictates the way you live your life and you are ready to make a change and take charge of your life, this book will help you overcome anxiety.

Fear and the amygdala have been studied since the 1800s, with scientists making a connection between the two. Both the brain and fear are complex, and the studies continue today. It turns out the finding in the 1800s was true, and the amygdala does play a significant role in emotion known as fear. Fear is a state, and you can feel it to different degrees. These range from mild worry, anxiety, fear, and panic. However, not all of these are related to the amygdala, the first two, worry and anxiety, are actually linked to the prefrontal cortex. This is a fairly new finding, but something that has been studied by neuroscientists ever since its discovery.

Fear is an intense emotion that can take many different forms, including both anxiety and panic disorders. Even though they can both be debilitating, it is possible to use the brain's own fear response to rewire it. This is possible because over time the brain has been conditioned to react a certain way to both real and perceived threats. So, just as it learned to do this the first time, it can learn to do it again, in a way that is not harmful. Fear takes two different paths in the brain, with different techniques that correspond with the two. So it is important to be knowledgeable about different brain functions and how to improve and develop them. This the key to releasing the grip fear has on you and your brain.

What listeners say about Social Anxiety