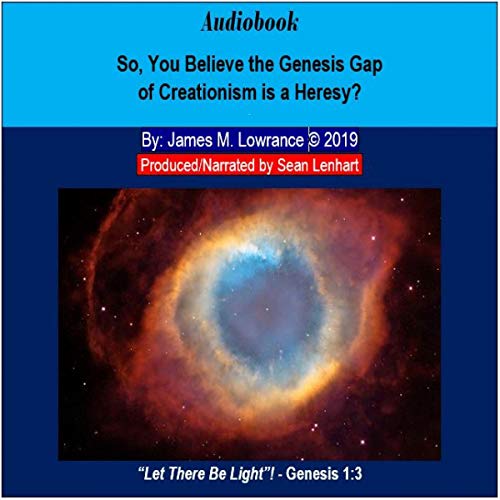 So, You Believe the Genesis Gap of Creationism is a Heresy?

By: James M. Lowrance
Narrated by: Sean Lenhart
Try for $0.00

This is likely my best book on the Genesis Gap subject and likely my last one to write as well. Certainly, I will still occasionally answer to anti-Genesis Gap articles, when they have a comments section but very seldom. As you will see me state within this book, there are many questions and they are key ones, that cannot be answered unless there was a fall of Satan and his cohorts (one-third of Heaven's angels), whom became unholy/fallen with him? The creation of Hell is not found in the Genesis narrative because it was a pre-Adamic event, not summed-up/added to another part of the creation narrative. Satan was already fallen when he approached Adam and Eve in The Garden of Eden, so his original fall was also pre-Adamic. This is evident by the fact that his temptation of them, to partake of the forbidden fruit (which when taken, caused them spiritual death immediately) included lies and blasphemy toward Our Heavenly Father.

While God allows temptation, he does not perpetrate it, unless it is not an evil temptation. A good temptation from God, which also means "testing and trials", might be the prompting of a Christian to help a person or persons in need. They may or may not do that thing that will help them and the Christian will lose rewards at The "Judgement Seat of Christ" (not to be confused with "The Great White Throne Judgement" for the unsaved). Part of Jesus' prayer he taught to the disciples was - "And lead us not into temptation but deliver us from the evil one." Tempting Adam and Eve, God's newly-made people whom God loved dearly, was not the reason Lucifer fell, to become Satan, it was extreme pride and elf-exaltation (Isaiah 14 and Ezekiel 28).

I have many scripture quotes and references to scriptures you can hear in this book that show this teaching to be far more important than most Christians realize. It is not essential to salvation, although it can be to some people (explanation in book), but it does open more meanings to the Holy Scriptures/The Bible - God's Word, to those who truly wish to understand it. I list many reputable sources, including some from the second and third centuries after Christ's resurrection, who recognized a before-Adam Earth. Yes, you read me correctly...sources from the 100s and 200s: seoncnd and third centuries AD. There are many pro pre-Adamic earth sources, written before and after Thomas Chalmers, whom many anti-Genesis Gap, Young Earth Creationists, believe is the man who started the teaching and that he and those of us now, who believe-in the teaching, are heretics.

What listeners say about So, You Believe the Genesis Gap of Creationism is a Heresy?

the mystery of lawlessness and strong delusion indeed when the unsound theories of man are foisted upon the Word of God. sola scriptura.

Absolute truth from the Bible

This is absolutely the biblical truths of this world beginning and can be backed up completely and solely by the word of God do your own research check it out it’s been taught and believed for many centuries and it is the only way that the biblical narrative really makes any sense when you look at the whole picture!