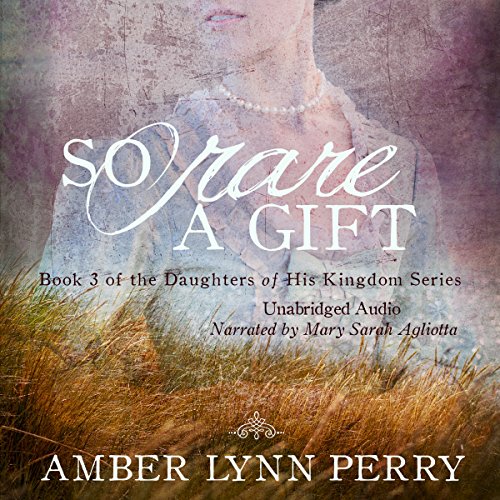 So Rare a Gift

Escape is Anna Rone's only option. Never again will she be trapped in a loveless marriage. A new life in America means safety - and discovering the truth behind her beloved brother's death. But when she is nearly captured and forced to return to England, her vow to never marry for anything but love is forgotten when she must marry for protection. Perhaps the handsome man she accepts is truly as caring as he seems. If he is not, her future in America is darker than ever before.

Captain Henry Donaldson aided the colonists too many times. And now, the British army intends to make him pay with his life. Without his friends in Sandwich, he would be a dead man. He's already changed his name, and when the kind, courageous woman he rescued offers to become his bride, he accepts despite the risks. His past taught him that women are not to be trusted and that love can cut deeper than the sword. Only time will reveal if this choice will bring the greatest pain he's ever known.

What listeners say about So Rare a Gift

Gods hand is in everything.

loved the book and the characters! can't wait for more books. narrator did a great job!

Newbie to the Genre

I haven't read much Christian Romance but I really liked this story! I cared about the characters and loved the historical setting. Great listen!

So awful it hurts.

I honestly didn’t expect much from a romance novel to begin with, but this was spectacularly bad. The main characters are way too annoying and melodramatic. I kept hoping it would get better since I used a credit to listen to this trash heap. However this is one audiobook I will be returning.

I think I would classify this as a romantic novel-not necessarily a ROMANCE. It came thisclose to being an okay book to listen to while you are doing monotonous work when you aren't really focused on the story. The narrator is very skilled-I really liked the various, distinct characters-she is good. What made me want to occasionally stick a fork in my ear is the voice she used when she was narrating when not in character-she speaks verrrrrrry slowly in a low, whispery voice and manages to enunciate the last consonant of every single word. Every. word. When that voice is reading prose that has a ridiculous amount of figurative language "his blood surged through his veins like a well trained army." "The clouds parted like curtains on a stage." "Wisdom preached from the pulpit of his mind" and my personal favorite "the ball in the gun pressed to his side was begging to be released" This is why I think it is a romantic book-it is very over the top, but it is consistently over the top-whenever something was about to be revealed, at the last minute, someone walks in or something happens that delays the reveal. The narrator is very good at what she does, the plot had potential but could have been made better with more history woven in. I just couldn't get used to the delivery-it wasn't unique enough to ever make me appreciate the over the top elements or stop rolling my eyes with every metaphor and simile.