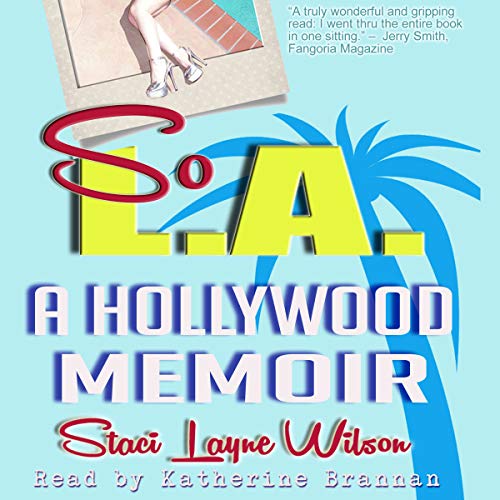 So L.A. - A Hollywood Memoir

By: Staci Layne Wilson
Narrated by: Katherine Brannan
Try for $0.00

Want sex, drugs, and rock and roll? It’s all here. But what is so moving about Staci Layne Wilson’s unconventional coming-of-age story is that in spite of her rocky childhood, she describes her parents with deep affection, generosity, and pride. Hers is a story of triumph over a legacy of alcoholism, suicide, and Hollywood burnout, but more than that, it’s a tender, gripping tale of unconditional love (with a healthy dose of humor). Despite the downsides, her upbringing gave her the powerful determination to carve out a successful life on her own terms.

Staci Layne Wilson tells tales of bygone eras - she grew up with showbiz parents in LA in the '60s and '70s, had ponies in the backyard and a psychotic monkey in the house, mingled with the stars on the Sunset Strip rock scene in the '80s, partied at the Playboy Mansion, and nearly died (twice!). She ultimately found love, purpose, and success as an author, film director, screenwriter, pop culture pundit, and notable red carpet reporter who has interviewed the biggest celebs in the world.

“As a music fanatic, I was in heaven over all the inside stories about The Ventures (through their 50+ year career!), Metallica, Led Zeppelin, and the glam-rock scene on the Sunset Strip. There’s also a whole master class on the heavy metal hangouts of Hollywood: The Rainbow, The Roxy, The Troubadour...Staci’s seen it all!” (Gene Katz, director of The Hair Band Tease)

What listeners say about So L.A. - A Hollywood Memoir

Wow this is one great Hollywood story! If you love all things glitz, glamour and rock and roll this book is a must read or listen. Staci's life is filled with so many wonderful tales from her childhood and more. Her glamorous mother and all the interesting characters she met and introduced to Staci. Her rock star father and the life he led. It is a story that keeps you engaged and is so well written. I highly recommend this for anyone who enjoys the unexpected and what it is to be so LA!

I am loving So L.A. - A Hollywood Memoir! Katherine Brannan's narration feels like sitting down with a good friend over a cup of tea. I want to sit on the edge of my seat and listen intently as Staci Layne Wilson's stories come to life. I can hear the coy smile from Ms Brannan's voice as we laugh with Ms. Wilson's trials and tribulations. Whether you grew up in Southern California or not, you will have fun listening to So L.A.!

I absolutely loved this book. One of my goals now is to go to all the places Staci mentions on this book. I love her other books and so it’s nice to learn more about her. This book has so much humor and so many stories that it is very entertaining. You simply must check it out.

The narrator did a wonderful job and it was almost as if you were at lunch with an old friend.

I love this book! It is as much about LA as it is about Staci.

Staci has a gift!

The best thing I could say about a book is I didn't want it to end. This is ride through the life and times of Staci Wilson. Hold on, it's also a history lesson about many of the magnificent places, caring friends and movie stars in the City of Angels. Staci's writing is her Mother's precious gift. So L.A. flows marvelously and effortlessly from her childhood to the big 50. Her success and a bumps in the road are chronicled throughout the book. I'm delighted Staci found her forever man, and after listening I know Staci would have been great mother. I recommend you read "Legends and Lipstick", another great read by her Mother, Nancy Bacon before this one.

The narration was annoying, the book was nothing like it's description. It was uninteresting and I barely got through it, planning on returning it.