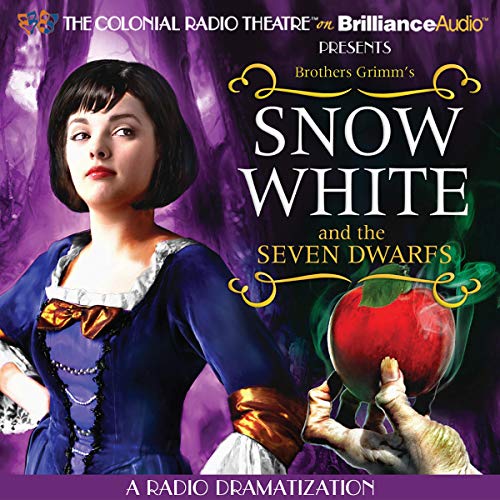 Snow White and the Seven Dwarfs

By: Brothers Grimm,Jerry Robbins - dramatization
Narrated by: The Colonial Radio Players
Try for $0.00

Once upon a time in the middle of winter, when the flakes of snow were falling like feathers from the sky, a queen sat at a window sewing, and the frame of the window was made of black ebony. And whilst she was sewing and looking out of the window at the snow, she pricked her finger with the needle, and three drops of blood fell upon the snow. And the red looked pretty upon the white snow, and she thought to herself, "Would that I had a child as white as snow, as red as blood, and as black as the wood of the window-frame."

Soon after that she had a little daughter, who was as white as snow, and as red as blood, and her hair was as black as ebony; and she was therefore called Little Snow White. And when the child was born, the Queen died. A year later, the King remarried a haughty and vain woman and that’s when Snow White’s troubles began.

What listeners say about Snow White and the Seven Dwarfs

Having tried a couple of performances from The Colonial Radio Players, I'm hooked. It's like listening to golden age radio, only without the static and without the commercials. I love that sort of thing, and you can tell these actors have a lot of fun with the performances. Of the titles Audible has, most of their works are historical or adventure stories, but this one stood out as... well, it's Snow White. Fairy tales aren't exactly typical of the lineup available here, so why not try it out?

The story as presented here is really close to the original Grimm version, with a few minor variations here and there, but nothing distracting or even overly noticeable. In the age where it seems like everyone's remaking these old stories on TV or film, it's refreshing to have a more faithful version of the classic for modern ears.

Weird twists of the story

It was simple, amusing, pretty well performed, and enjoyable. It wasn't too confusing or scary, and I really like it. Definitely recommend it.