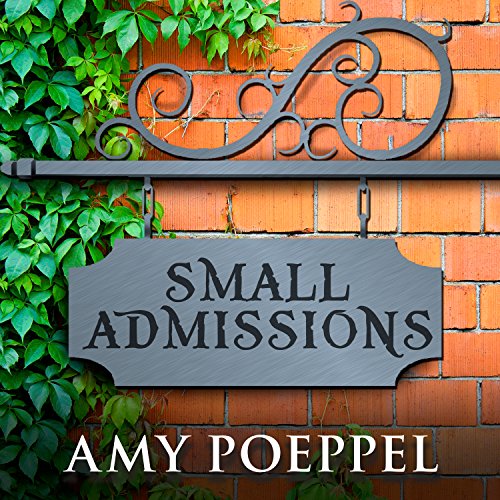 By: Amy Poeppel
Narrated by: Carly Robins
Try for $0.00

For reasons no one (least of all Kate) understands, she manages to land a job in the admissions department at the prestigious Hudson Day School. In her new position, Kate learns there's no time for self-pity during the height of the admissions season. Meanwhile, Kate's sister and friends find themselves keeping secrets, hiding boyfriends, dropping bombshells, and fighting each other on how to keep Kate on her feet. On top of it all, her cranky, oddly charming, and irritatingly handsome neighbor is more than he seems.

Through every dishy, pause-resisting twist, it seems that one person's happiness leads to another's misfortune, and suddenly everyone, including Kate, is looking for a way to turn rejection on its head, using any means necessary - including the truly unexpected.

What listeners say about Small Admissions

For fans of "Where'd You Go, Bernadette ?"

I wasn't a fan of WYG,B, and I thought this was similar in tone and humor. Unrealistic characters, some of them really unlikable. The narration was a bit too exaggerated, not sure if that's the narrator's choice or the directors. In any event, it cheapened this already silly story.

Hang in there. It's worth it.

When I started reading, thought it would be cliché. Glad I persisted, because it got a lot more interesting.

No depth, like a worse version of gossip girl

Maybe this just wasn’t meant to be an audio book but the transition between characters was in no way smooth or easy to follow. Everything was cookie cutter and predictable. Sure the heroine hit adversity for the first time in her privileged life and let it ruin her so she gets a job to prove she’s more than scum. It’s a book version of a cheesy lifetime movie. No surprises, and just messy

I dont get the hype

Got 3/4s of the way through & realized I didn't care about any of the characters at all or how the story was going to end. The main character was just bleh, her "friends" were awful, her sister was annoying. This one just didn't appeal to me at all, I don't get the hype.

This is a light hearted and uplifting story. Premise is clever.
I’d recommend it to anyone who likes a happy ending.
Can’t understand how someone who is unable to pronounce any “g” in words ending in “ing” is a narrator.
“Staying” becomes “stain”, “marrying”, “marryene”, etc.
Better to read this book.

I picked this story because I have also worked in admissions, and I was interested to see what the stories of the prospects would be like. This book certainly didn't disappoint on that score. The prospies are definitely the most entertaining part of this novel. With an ensemble of characters and told in a piecemeal kind of way, the story pieces itself together over time--and it's waiting for the next piece that gets you hooked. My favorite part of the story was when Nancy and her husband, Sam, I think, go to the therapist's office in the January chapter and replay their interview. I laughed and squealed throughout the whole scene, and it was after that that I realized I was hooked. With regard to the audio portion, I was put-off by Carly's squeaky high-pitched voice for both Kate and Chloe--I had a hard time distinguishing between who was saying what in any scene where Kate and Chloe were talking, or Angela and Vicky were talking because they sounded so similar. But Carly definitely had a range and set up pacing that made it easy to distinguish between all the other characters. Her Robert was totally spot on. Not sure who I would recommend this to except for former colleagues in admissions--or friends that like Madeline Wickham novels. It's that kind of bubble gum sweet.

I liked this book. it is a light story, easy to read, and fun. At first, the main character seems silly and dumb, but as the story moves on and you get to know her more, you learn there is more to her. I had a little trouble following who was telling the story. The narrator would start a sentence with "I", but it wasn't clear which character it was; especially because there were not clear chapter breakdowns like a book would have. It is possible that I missed something- like a name being said- but it shouldn't be that easy for a listener to miss. This definitely would have benefited from more than one voice.
Despite that, Carly Robins was perfect for this! She portrayed the story well. (Does her voice remind any one else of Amy Adams?!)

I really got interested in the story and enjoyed listening. It was a bit difficult at times to know immediately who was talking because the females all sounded the same. But it was still a good story and a good listen.

"I look dykey in a blazer"

Is a line from this book. Meant to be funny, cuz she's on a job interview. That line marked the end of my short & joyless ride.