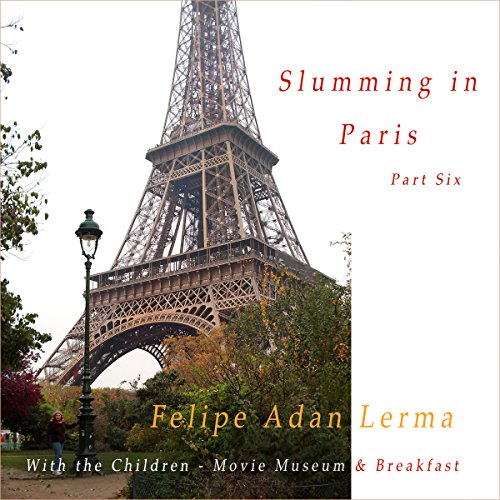 Slumming in Paris Part 6, With the Children - Movie Museum & Breakfast

By: Felipe Adan Lerma
Narrated by: Paul Woodson
Try for $0.00

Part six is the fifth of seven novellas forming a subset with Slumming in Paris, additionally titled With the Children.

Further, an identifying title part is given to each of the seven in the With the Children series. This audiobook is Movie Museum & Breakfast. The story continues with the children and the adults having welcomed the arrival of their grandparents and small neighbor child and the larger expanded family group venturing out into Paris together.

A full list of those titles, including all the currently named chapters (rather than numbered, as in my previous work) is at the end of each book.

Parts two through eight are comprehensive, with an overarching theme and story of experiencing Paris and finding what that experience means within. While part one, Slumming in Paris, Arthur & Gricinda is more obviously focused on the two adults, parts two to eight prominently feature the children.

Experiencing Paris is, in this work, both symbolic and an engulfing immersion all its own.

The mystery for each person who visits this wonderful city is how to individually reconcile everything he or she has known before and hopes to know. And to know, in this instance, because there are so many characters, mostly young, is a variable thing.

And realizing that knowing is a process for us as people, is, I truly believe, one of the greatest gifts of Paris and fiction that we can receive.

What listeners say about Slumming in Paris Part 6, With the Children - Movie Museum & Breakfast