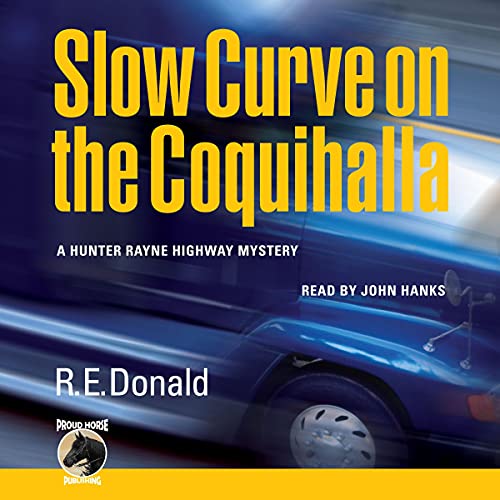 Slow Curve on the Coquihalla

When a well-respected truck driver, the owner of a family trucking business, is found dead in his truck down a steep embankment along the Coquihalla highway that winds through the mountains in British Columbia, his distraught daughter wants to know how and why his truck left the highway on an easy uphill curve. This compels Hunter Rayne, a fellow trucker and retired RCMP detective with daughters of his own, to help her find answers.

As he uncovers signs of illegal cross border activity originating in a Seattle warehouse, Hunter recruits an old friend, an outlaw biker, to infiltrate what appears to be an international smuggling ring. But while Hunter follows up clues and waits for critical information from his old friend, the wily biker starts to play his own angles. Finally, putting all the pieces together, there in the dark on the same uphill curve on the Coquihalla highway, Hunter risks it all to confront the murderer.

Slow Curve on the Coquihalla is the first novel in a traditional mystery series featuring "semi" professional sleuth Hunter Rayne. After serving more than 20 years in the Royal Canadian Mounted Police and becoming a skilled detective, Hunter resigned from the force and took to the road as a long-haul trucker. His ex-wife is convinced he is running away from the personal tragedy that made him leave a job he loved. Hunter himself doesn't know why, he only knows he has to keep following the white lines.

What listeners say about Slow Curve on the Coquihalla

Thoroughly enjoyable story that keeps a good pace throughout. Very tense in parts and the different elements came together nicely. Intriguing story line that is both outhere and believable all at the same time. Narration by John Hanks and editing were also top notch. Will definitely be listening to the second book.

A good mystery set in the trucking industry

Slow curve on the Coquihalla by RE Donald is a mystery thriller who’s protagonist Hunter Rayne is a retired Mountie and now a trucker. A fellow trucker dies under mysterious circumstances. As this is a police procedural book, Hunter investigates and solves the case full of intrigue. The writing is great and the scenes are so fully described that the reader feels part of the landscape. The narration by John Hanks was also great! If this book is any indication, this series will be wonderful!

When Hunter Rayne retired after two decades with the Royal Canadian Mounted Police, he bought himself a truck and worked, self employed, for Watson Transportation. When the owner driver of another company is found dead in his cab, mysteriously crashed into a ravine, Hunter's boss, El, asks him to look into it - the dead man had been such an experienced and careful driver, unlikely to have an accident like that. So, metaphorically, did he jump or was he pushed. With a gentle investigation, Hunter tries to determine the truth for the dead man's daughter at the same time as he meditated on his own life and the choices made.

This is a lovely book. Told from Hunter's perspective, the reader rides alongside him in his truch, meets and gets to know several characters along the way, and becomes privy to his innermost fears and hopes. Car more than just a mystery, which in itself is all too predictable, it is the whole rounded slice of a life which is so intriguing. The excellent narration is by John Hanks, whose warmly accented performance is also filled with clearly differentiated and appropriate voices of the several other characters as well as being perfectly paced and well modulated. Easily a five star performance. Unfortunately, a point has to be removed because of a major editing glitch at the end of chapter one where several minutes of stumbling over the text, painful to hear, were not removed. This should definitely have been taken out. All is recovered perfectly in the official chapter two, but the damage was severe.

My thanks to the rights holder who freely gifted me with a copy of Slow Curve on the Coquiha!la at my request. A good book which moves slowly but easily holds the reader's attention throughout and one I would definitely recommend to all who enjoy depth of character and, possibly, have wondered what it is like to be a long distance truck driver.

I would enjoyed listening to John Hanks.

I really loved this book. An ex Mountie , who is known a hard working truck driver.

Hunter finds himself using his past, helping him solve a mystery. With the help of an outlaw biker friend help a smuggling ring. At the same time keeping his family together.