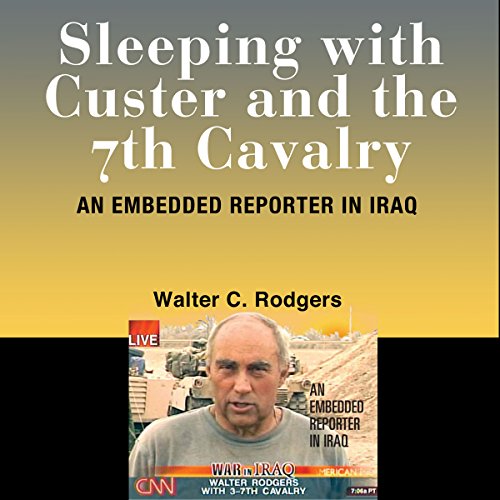 Sleeping with Custer and the 7th Cavalry

An essential document of the first American war of the new century.

Rodgers was embedded with the "tip of the tip of the spear", the armored reconnaissance unit tasked with clearing the way for the invasion of Iraq. For the next three weeks Rodgers, a seasoned combat correspondent who has covered armed conflicts in the West Bank, along the "Green Line" in Lebanon, and in Sarajevo, Azerbaijan, and Afghanistan, was a first-person witness to the opening campaign of the most significant war America has embarked upon since Vietnam.

Rodgers and his journalistic colleagues in Operation Iraqi Freedom became pioneers in the process of embedding, the placing of journalists who can transmit video reports in real time under combat conditions with no censoring authority to block their reporting. During this journey into war, Rodgers and his crew embraced the dangers, the numbing fatigue, and the moments of stark fear of the young armored cavalrymen they lived with twenty-four hours each day, an experience that created for them the lifelong bond that only soldiers serving together under fire share.

" Sleeping with Custer and the 7th Cavalry: An Embedded Reporter in Iraq attests to the character of American soldiers- their intelligence, courage, and integrity." (President Jimmy Carter)
"Walt Rodgers was the best of the embedded TV reporters riding into Baghdad, and this thrilling book shows why. It's a brilliant and colorful look at the worlds of both war and journalism." (Walter Isaacson, former chief executive of CNN and author of Benjamin Franklin: An American Life)
"This stirring close-up account puts a human face on the bravery and determination of all those engaged in the conflict in Iraq." ( Booklist)

What listeners say about Sleeping with Custer and the 7th Cavalry