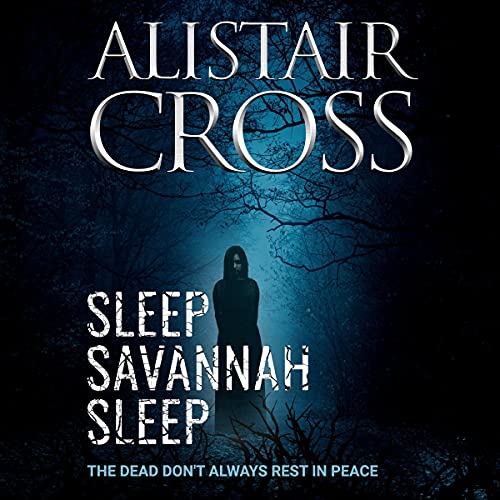 By: Alistair Cross
Narrated by: Isaiah Fowler
Try for $0.00

Jason Crandall, recently widowed, is left to raise his young daughter and rebellious teenage son on his own - and the old Victorian in Shadow Springs seems like the perfect place for them to start over. But the cracks in Jason’s new world begin to show when he meets Savannah Sturgess, a beautiful socialite who has half the men in town dancing on tangled strings.

When she goes missing, secrets begin to surface, and Jason becomes ensnared in a dangerous web that leads to murder - and he becomes a likely suspect. But who has the answers that will prove his innocence? The jealous husband who’s hell-bent on destroying him? The local sheriff with an incriminating secret? The blind old woman in the house next door who seems to watch him from the windows? Or, perhaps, the answers lie in the haunting visions and dreams that have recently begun to consume him.

Or, maybe, Savannah herself is trying to tell him that things aren’t always as they seem - and that sometimes, the dead don’t rest in peace.

“Sleep Savannah Sleep hooks you with a small-town atmosphere that quickly turns ghostly cold. Beware a plethora of twists and turns...” (Michael Aronovitz, author of Alice Walks and Phantom Effect)

Wow... I am almost speechless. What a wonderful, enchanting, sad, happy, and all around best story I've ever come across. This story begins with a grieving family who is trying to start over. What they encounter is like no other and there are ghosts... yes ghosts involved. I highly recommend this story to everyone! The narrator took Cross's brilliant story to great heights, making everything seem so real. Bravo! 👏

Wow, this was really fantastic. Reaching the end, started feeling disappointed with the direction the author was going, but at the last second, it wrapped up perfectly.

I loved this so much!

An engaging story with a shocking conclusion! It Kept me guessing until the end. ooohhhh!!

This book is disturbing in many ways. From the bits of the supernatural to the mind games the characters play to the twists it takes... even the protagonist’s decision s are disturbing.

I was surprised, really surprised, a couple of times by plot twists. And yet, the foreshadowing was clear in hindsight. That’s rare for me.

I received this audiobook for free in exchange for a review

I've recently discovered Alistair Cross's books and I'm so glad that I did. Each one has a mix of love, lust, horror and death. Jason Crandall just lost his wife to cancer and he's moved his family to Shadow Springs as a chance to start over. His daughter, Amber, is definitely a daddy's girl, with a sweet temperament and an ever-present smile. Brent is a surly 17-year-old, quick to anger, with a sharp tongue and an air of hostility toward his father. It's uncomfortable just to be around him. Jason is a licensed massage therapist who loves to read and write books. He's a good-looking man and finds many of the women in town, lining up at his door for a massage. Something is off in Shadow Springs, but Jason can't quite put his finger on it. Little does he know that when Savannah Sturgis shows up for his services, it's more than a massage she's looking for. She's a beautiful woman, but rumors have been circulating for years that she's entertained most of the men in town. She certainly tries to entice Jason as he's giving her a massage, but he's having none of it. When Savannah suddenly disappears and is found dead, he starts to see and feel things that can't be explained, upsetting his social-conscious son in the process. Their arguments are horribly loud and Brent is defensive and angry. As Jason's visions become more dangerous and painfully descriptive, he realizes that it's Savannah and she's trying to tell him something. The mystery is intricate and involves so many suspects that it's difficult to pin her murder on any one person. It takes a shocking turn that I never saw coming, but makes so much sense! The ending unfolds perfectly and I was satisfied with the HFN conclusion. The narration is exceptionally done by Isaiah Fowler with an expressive and dynamic voice that gives each character a unique personality.

Like a good ghost story? Like thrills? Sleep Savanna Sleep is the book for you. Alistair has a way of painting words and characters leaving the reader wanting more!

I've been looking to add an author to my list and you are it! I could not put it down. I usually only listen to books in my car but I had this on at home too.
I loved Jason but Brent made me grit my teeth.
The author did a great job fleshing all of the characters out and had me constantly wondering, "what would I do if this was me?"
the narrator was fantastic too, thank you for bringing everyone to life the way you did.

I was given a copy of this for a fair and honest review.

This was my first foray into the solo work of Alistair Cross, and it won’t be my last. Sleep Savannah Sleep reads like a twisted soap opera nightmare. At times it was reminiscent of Peyton Place, a small town filled with gossip and sex, and at other times there were shades of David Lynch.

Cross knows and understands his genre, he plays with it exquisitely, with some subtle nods to Daphne Du Maurier, VC Andrews, and Tamara Thorne. This book was a love letter to all things good, gory, and gothic.

Alistair Cross takes a simple premise and turns it on its head. He created characters that will haunt me...for quite awhile.

This was my first foray into the world of Alistair Cross and it shall not be my last. Sleep Savannah Sleep weaves together the mundane and the mystical in flawless fashion, blending realistic and relatable characters with haunting and horrific imagery. Cross creates a flawed yet empathetic protagonist in Jason Crandall, a recently widowed father, who leaves city living to find a better life for his children after the death of their mother. He attempts to set down roots in an idyllic small town, rife with nosy neighbors and residents who have known each other far too long and become far too familiar with one another, only to find himself embroiled in their interpersonal dramatics to no fault of his own. He becomes more and more ensnared, all while trying to be the father his children need, as well as honor the memory of his wife, but despite his best efforts, Jason's life spirals wildly out of control as he becomes haunted, plagued with night terrors and waking delusions, and cannot extricate himself without sacrificing everything. Highly recommend.

Anther brilliant book
Jason Crandall, recently widowed, is left to raise his young daughter and rebellious teenage son on his own

What an intriguing story! Just the right amount of paranormal spookiness.

The characters are just normal relatable people, Jason Crandall a recent widower moving to a new town to give himself and his kids a fresh start. The house has an eerie vibe as do some of the towns occupants but nothing prepared me for what the outcome would be.

When Jason starts to see things and have out of body experiences he thinks he has a series health issue but what is actually happening will change his life forever.

An engaging and at times thrilling read that grabbed my attention from the start and finished with a twist I did not see coming not until it was about to be revealed.
The narrator did a fantastic job bring this story to life.

I got this audiobook for free from the author in exchange for a fair and honest review.

I really enjoyed this story, initially I thought the story wasn’t for me but quickly I realised that it was going in an interesting direction that kept me on the edge of my seat. Really glad that I stuck with it as I did not see the ending coming but absolutely loved it. I really loved the dynamics between the characters and the critical/sceptical view that many of them had towards the supernatural. I really enjoyed this book and I’m looking forward to digging into the next book I have from this author.

I don’t know why I started this book because I don’t like horror. I’m easily scared and have nightmares afterwards.
Jason loses his wife and moves him and kids to a creepy old house.
I’ve got to be honest not sure I’ll read any more in this genre but this is a great but if you enjoy that type. I also was convinced I knew ending but I a shockingly wrong.
No overly found of narration but the story helped it that

Very much worth a read/listen.

Sleep Savannah Sleep would make a great film. At first, I wasn't sure that I was going to get hooked in, but I'm glad to say it didn't take long before I was listening to the tones of Isaiah Fowler's narration with eager expectation. His voice acting was very good, with believable child, women, and male voices, which added to the pleasure of the story.

Savannah was known throughout the town as a product of the awful events of her youth, events that shaped her and made her who she was. She was beautiful, but she was trouble, at least she was according to the local mechanic, yet it's odd how a community can change its attitude towards a person when something bad happens.