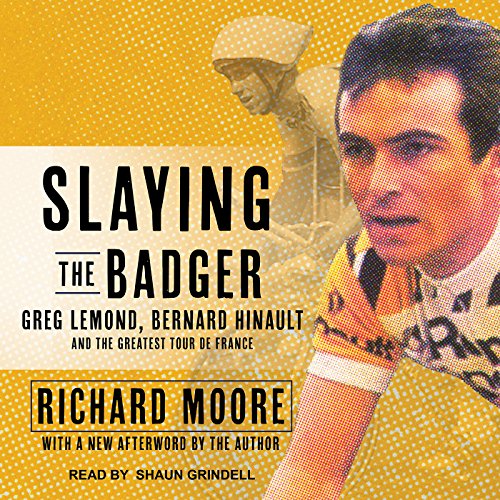 By: Richard Moore
Narrated by: Shaun Grindell
Try for $0.00

Bernard Hinault is "Le Blaireau", the Badger. Tough as old boots, he is the old warrior of the French peloton, as revered as he is feared for his ferocious attacks. He has won five Tours de France, marking his name into the history books as a member of cycling's most exclusive club.

Yet as the 1986 Tour de France ascends into the mountains, a boyish and friendly young American named Greg LeMond threatens the Badger - and France's entire cycling heritage.

The stakes are high. Winning for Hinault means capping his long cycling career by becoming the first man to win the Tour six times. For LeMond, a win will bring America its first Tour de France victory. So why does their rivalry shock the world? LeMond and Hinault ride for the same team.

Asked by a reporter why he attacked his own teammate, the Badger replies, "Because I felt like it." and "If he doesn't buckle, that means he's a champion and deserves to win the race. I did it for his own good." LeMond becomes paranoid, taking other riders' feed bags in the feed zone and blaming crashes on sabotage. Through it all, with the help of his American teammate Andy Hampsten, LeMond becomes the first American to win the Tour de France.

"[ Slaying the Badger is] a gripping narrative of this psychological and physical three-week war." ( Wall Street Journal)

What listeners say about Slaying the Badger

I really enjoyed this book. It brought me back to the first Tour de France I ever followed, which was largely responsible for my getting into cycling. The author is through in the many figures he has interviewed. It is well written and easy to keep focused on.

Warning: Don't play audio around children. I don't recommend it for younger readers because of the inclusion of a lot of foul language in the quotes. It's a shame. They could have been edited or replaced with symbols and made this a great book for my older kids at home. It would have detracted nothing from the book. Lost one star for that.

If I never hear someone say Paul Köchli like the narrator again - I'll be in heaven. I really wanted to like the book more but man... why are we pronouncing his name like its some surprise every single time. Like you cant do it without using this huge level of panache! It drove me crazy. Pronouns are pretty useful too. I'm sorry but it was that annoying.

Not the greatest book for novice to cycling.

As a novice to the world of professional cycling I found the first half or more of the book difficult to follow. However the author does an excellent job of tying it all together as you get deeper into the story of the 1986 tour de France.

A must read for any cycling enthusiast

Loved it...takes you behind the scenes with all the players involved with the (second) greatest Tour de France ever. (I think Greg Lemond's '88 win is the best)

Great book for understanding some of the thought processes of riders in professional cycling. More race details would have made this book exceptional.

I remember when Greg LeMond won the Tour de France and thought how difficult that must've been - this book tells just how difficult is really was, not only physically but also mentally and emotionally.

Hard to put this book down. Actually in my case turn off because it was an audio book lol. It was like a sports book and a drama rolled into one. If you're a fan of cycling, especially the Tour, I think you will really enjoy this book.

I Love this book!

I feel like i just had a new Grimms Fairy Tail read to me. Now that i listened to the book, i will sit down red it too.

Richard Moore (co-host with Lionel Byrnie and Daniel Friebe in the pitch-perfect Cycling Podcast) is a consummate journalist and storyteller. Although I confess to wishing he had read the audiobook himself, this book is one I will buy in its paper format, too, to flip through, ponder, find inspiration.

Really a great story and cycling story, loved it.

So much to take in... all the high profile characters, all the interviews, back story... it was all woven together for a book that keeps you wanting more.

As a cycling enthusiast, it would be a must listen. Inspired because of it, Thanks.