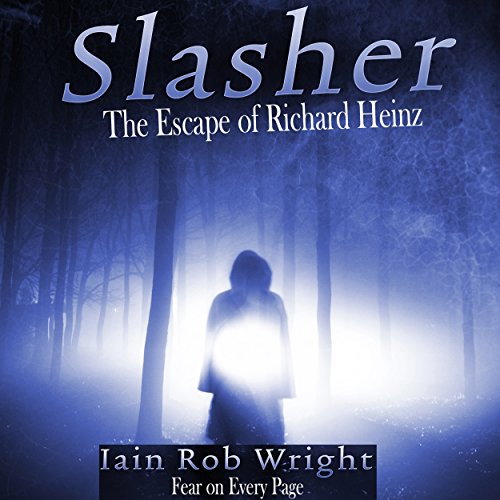 Slasher: The Escape of Richard Heinz

By: Iain Rob Wright
Narrated by: Chris Barnes
Try for $0.00

When convicted killer and certified psychopath Richard Heinz escapes from a secure mental hospital, his re-capture falls on the shoulders of MCU agents Dr. Jessica Bennett and Howard Hopkins. Entering a dark wood on a rainy night, they must try to understand and anticipate the mind of the sick killer before it's too late.

Richard Heinz is out for a reason, and he's just taken a hostage.

If you go into the woods tonight, you're sure of a big surprise....

What listeners say about Slasher: The Escape of Richard Heinz

Wright and Barnes Together Again

What did you love best about Slasher: The Escape of Richard Heinz?

I love any story that looks at the mentally ill, especially serial killers. Iain Rob Wright made the story creepy, disturbing, and interesting. I'm really looking forward to the next part.

My favorite character in Slasher was Richard Heinz, for the reasons listed above.

Howard, as performed by Chris Barnes was my favorite. Barnes did an excellent job of giving the character a wide array of emotions and nailed the British accent the character needed.

If you could take any character from Slasher: The Escape of Richard Heinz out to dinner, who would it be and why?

I would absolutely take Richard Heinz out to dinner if given the opportunity. He is a fascinating character and just listening to him speak about his warped perceptions would be very interesting.

This is a short book, only about an hour and a half long. Chris Barnes's narration adds a new level of excitement and intensity to the story, and the Wright/Barnes team is one I can't get enough of. It helps if you have read Wright's 'The Picture Frame' since this is a continuation of that story, but 'Slasher' stands well on its own. Slasher is perfect for those who don't like their books too scary and it will keep you on the edge of your seat.

Where does Slasher: The Escape of Richard Heinz rank among all the audiobooks you’ve listened to so far?

I would rank this story in the top of all the audio books I have listened to.

I loved the story. Great writing by Iain Rob Wright he really brings the charachters together making a great and thrilling story.

Excillent narration by Chris Barnes he makes the charachters come to life and you can relate to them.

Yes I would listeren in one sitting.