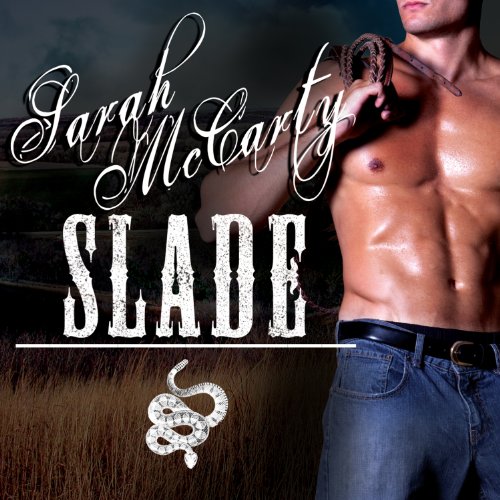 Slade needs a cure, but what he finds is a savior, in the latest paranormal romance from national best-selling author Sarah McCarty. Contains mature themes.

What listeners say about Slade

Just like the first three in this series, this book is great. Narration and story make for another awesome listen.

Very good story! I love this series. Very much entertaining. The author does a good job with this paranormal romance story. After The Dark Series and The Lords of The Underworld, This is my favorite series.

Fun continuation of an adorable series with a twist on Vampires. I have always loved a good vampire tale, but one with a twist on the basic mythology is always a treat and this series has been an entertaining treat.

I can't get enough

I have really loved this series. It's been a grand adventure with SM and her cowboy vampires. I had assumed this would be the last book in the series, but I'm actually thrilled at the ending to realize that I was mistaken. I'm looking foward to her next addition to the storyline. I realize SM may have ran out of single brothers but she has plenty of ammunition for other books. Her writing style greatly appeals to the paranormal gal in me and also her sex scenes light up my ears. Her books are the perfect combination for my listening pleasure.

So I would give a big ole YES to this one too. If you follow my reviews then you know I will advise you to start with Book 1 because this is not a stand alone series. Plus every book is sooo worth your credit and time.

Ending was a disappointment!

I can’t believe how this book ended; especially since it appears to be the end of this series. There is absolutely no resolution to the major conflict, of the series. I’m totally bummed, there are so many questions that will now never be answered.

Before the ending, this had been my favorite book, of the series. This book is like cliffhanger on steroids.😠
-V from Kansas

Well if the picture doesn't grab you then the story will right from Chapter 1 you're 'BANG' in the middle of it.

Then the hours just fill up with great characters (from the past and present) a fantastic plot that keeps you riveted, enthralled and entertained, a sexy vampire, romance, funny LOL verbal quips and banter and emotional heartbreaking decisions. Then if all that isn't quite enough for you it's read by the talented Tavia Gilbert whose voice brings to life all of Sarah McCarty's characters and she always manages to put just the right emotion into each of their voices as they all live through the action-packed story-lines.

Not a stand alone listen and hey why deprive yourselves anyway 'cause when you find a good series you'd want to start at the beginning anyway.

Couldn't put this down!

Would you listen to Slade again? Why?

This was Sarah McCarty's best book yet. They keep getting better and better. The romance was exciting and Slade was a total sexual being under all those lab coats.

What was one of the most memorable moments of Slade?

Their first sexual encounter was amazing!

Have you listened to any of Tavia Gilbert’s other performances before? How does this one compare?

I have listened to every one of Tavia Gilbert's paranormal performances. I started listening to her with her Jeaniene Frost books and loved her performances so much, I actually starting buying books just because of Tavia Gilbert. She is by far the best in the business!

Would you listen to Slade again? Why?

Absolutely. Love the series. Nothing like well built, good looking, protective, alpha males to make you tingle. This is also a very well written series in that all the main characters are woven into each book so you don't loose track of what's happening.

What does Tavia Gilbert bring to the story that you wouldn’t experience if you just read the book?

I think she was perfect for this series. I typically like a good male narrator, but Ms. Gilbert always does a great job.

Is this the Last installment to the series??

Slade is the fourth brother and last of the Johnson family. He is the inventor and is always in his lab working on ways to stop the enemy. However, the enemy is not only out there it is in his home as well. He needs to find a cure for his nephew. Then his text-messaging friend is in danger and he must get out of his lab to help her. This is the latest book in the "Shadow Wrangler" series and the romance is as intriguing.

Not a formula Story..,Has WTF moments!

Would you consider the audio edition of Slade to be better than the print version?

Never read it...be Tavia Gilbert's voice is unmatched. She makes you forget you are listening to ONE person...she is just one person isn't she?!?!

The Ah Ha moments. Sarah McCarty wrote a great love story without following the "Formula" for ever story in the series. Each male character has his OWN way of falling in love, and each female lead is a powerful woman with her own methods.

2 scenes: When Slade is talking about Jane being afraid of him when she wakes up...the whole time, she was awake, in control and listening.Also...Jane leaves the house to find Slade. She's putting daylight in wolf after wolf to get to her man...the whole time thinking...I'm not wonderful, I'm just scared. She's such a real woman!

When Jane puts Slade in the box and decides to stay and guard him...very unexpected.

SPOILER ALERT...don't read this is you want WTF moments...on the other hand, listening to Tavia will take you into the story even if you THINK you know what's going to happen.