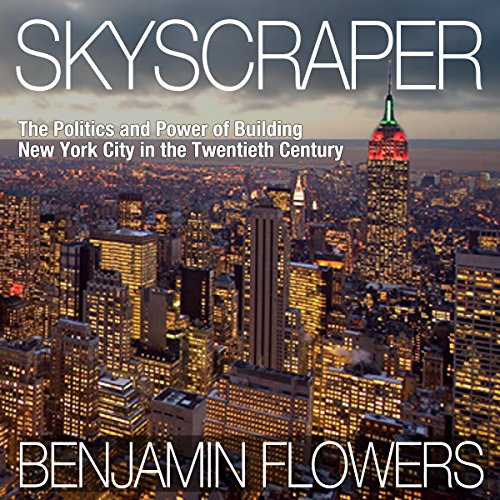 By: Benjamin Flowers
Narrated by: Ernest "Ernie" Sprance
Try for $0.00

In Skyscraper: The Politics and Power of Building New York City in the Twentieth Century, Benjamin Flowers explores the role of culture and ideology in shaping the construction of skyscrapers and the way wealth and power have operated to reshape the urban landscape. Flowers narrates this modern tale by closely examining the creation and reception of three significant sites: the Empire State Building, the Seagram Building, and the World Trade Center. He demonstrates how architects and their clients employed a diverse range of modernist styles to engage with and influence broader cultural themes in American society: immigration, the Cold War, and the rise of American global capitalism.

Selected by Choice magazine as an Outstanding Academic Title for 2010. The book is published by University of Pennsylvania Press.

"In this both sweeping and specific book, Benjamin Flowers describes the Empire State Building, the Seagram Building, and the World Trade Center towers, explaining why developers undertook them and how personal ambitions influenced their designs." ( Journal of the Society of Architectural Historians)

What listeners say about Skyscraper

Will put you to sleep

Author's should record their own books. Wanting to "hear" the story, but the reading isn't authentic, and therefore distracting.

Those of you expected to hear a story about the NY

Those of you expected to hear a story about the New York 's skyline might be disappointed. The beautiful book cover misled me into thinking this book is a N.Y. story per se but soon the narrator said specifically it is NOT. A little late for me...

Occasionally very academic in approach but otherwise excellent look at the history of New York and the three buildings highlighted.