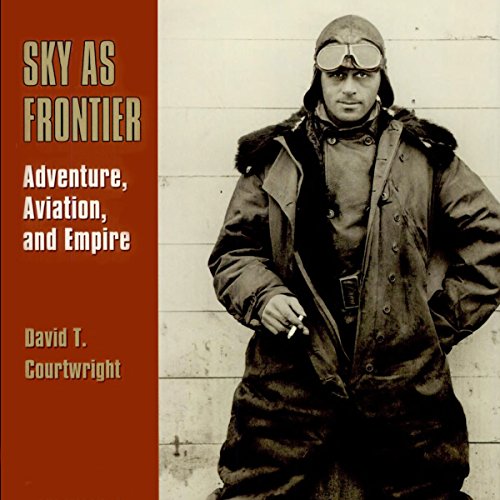 By: David T. Courtwright
Narrated by: Patrick Ross
Try for $0.00

The airplane changed the course of history. Above all, it changed the history of the United States. When the Wright brothers invented their flying machine, Americans lived in a nation of two dimensions, circumscribed by lines drawn on a conventional map. A century later, their nation existed - in fact, reigned - in three dimensions. Two million Americans slipped the surly bonds of earth daily, carried aloft by aircraft operating in every part of the world.

The airplane turned the sky into a new domain of human activity, a fast-developing frontier. The first to brave that frontier were adventurous young men. Then came the rich and the hurried. David Courtwright has written an ambitious history of American aviation ranging from the patent fight between the Wright brothers and Glenn Curtiss through the tragedy of 9/11 and the Iraq War. Along the way, Courtwright stops to consider dogfighting, barnstorming, the first air mail pilots, the development of airlines, air power during World War II, flight's impact on the environment, the troubled space frontier, and how the male-dominated aviation enterprise was domesticated and democratized.

Aviation's frontier stage lasted a scant three decades, then vanished as flying became a settled experience. Sky as Frontier recreates that pioneer world and shows how commercial and military imperatives destroyed it by routinizing flight.

What listeners say about Sky as Frontier