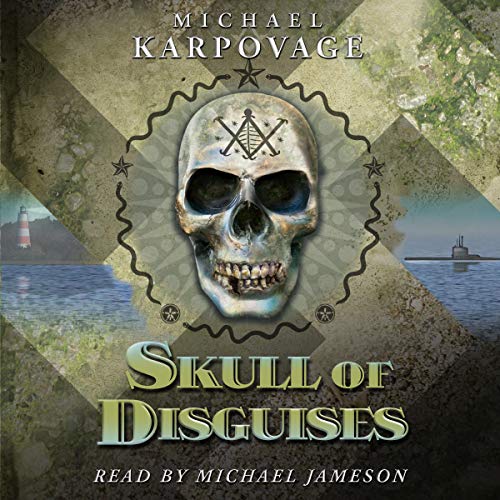 When a valuable Nazi SS Skull Head ring - one of the most sought-after World War II collectibles - is mistakenly left behind at his new Savannah business, Freemason military historian Jake Tununda sets out to Sapelo Island, Georgia to find its owner. He meets Doctor Blackbeard - the Hoodoo root doctor, Buffalo Soldier, Prince Hall Mason, and legendary Saltwater Geechee moonshine king. Jake’s good intentions soon backfire as he’s thrust into a deadly domestic situation involving an abusive guardian and the pilfering of sacred land belonging to slave descendants. His moral compass is sent spinning after he finds out the skull ring is evidence of a dark military program kept secret since the final days of the war: Operation Overcast and the human smuggling of Nazis back to America.

From author Michael Karpovage comes another brilliantly-plotted and meticulously-researched novel meshing historical fact with an adventurous treasure hunt. Skull of Disguises is centered around a mysterious 1945 German U-boat buried deep in the maritime forest of a remote Georgia barrier island. Coupled with a manhunt for the ruthless master thief Phoenix and a showdown with brutal Sinaloa cartel drug smugglers, Jake must overcome several deadly confrontations before he and his team can make the perilous trek to find the German U-boat. And what lurks inside.