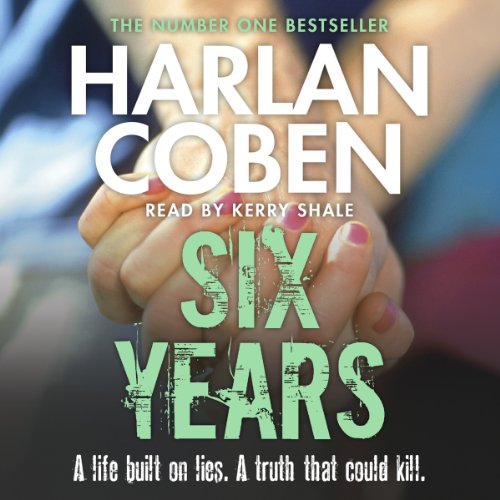 By: Harlan Coben
Narrated by: Kerry Shale
Try for $0.00

Six years have passed since Jake Sanders watched Natalie, the love of his life, marry another man. Six years of hiding a broken heart by throwing himself into his career as a college professor. Six years of keeping his promise to leave Natalie alone, and six years of tortured dreams of her life with her new husband, Todd. But six years haven't come close to extinguishing his feelings, and when Jake comes across Todd's obituary, he can't keep himself away from the funeral.

There he gets the glimpse of Todd's wife he's hoping for...but she is not Natalie. Whoever the mourning widow is, she's been married to Todd for more than a decade, and with that fact everything Jake thought he knew about the best time of his life - a time he has never gotten over - is turned completely inside out. As Jake searches for the truth, his picture-perfect memories of Natalie begin to unravel. Mutual friends of the couple either can't be found or don't remember Jake. No one has seen Natalie in years. Jake's search for the woman who broke his heart - and who lied to him - soon puts his very life at risk as it dawns on him that the man he has become may be based on carefully constructed fiction.

Kerry Shale’s stage credits include His Girl Friday (National Theatre) and Frost/Nixon (West End). TV credits include Dr Who and Life’s Too Short. Recent films include A Fantastic Fear of Everything. He has won three Sony Radio Awards, the APA Award for Best Male Audio Book Reader (UK) and the Audie Award for Best Male Audio Book Reader (USA). His audio books include two winners of the Man Booker Prize, Life of Pi and The White Tiger.

What listeners say about Six Years

This Was a very good. I really enjoyed listening to this story. Could not put it down

Would you try another book from Harlan Coben and/or Kerry Shale?

What could Harlan Coben have done to make this a more enjoyable book for you?

plot was banal, so stupid and predictable, hated myself for wasting the time taken to listen !

Excellent thriller away from the Bolitar series which are also great but slightly more predictable. Like most of his one off's, 6 years is a great mystery that slowly unfolds chapter by chapter. Unputdownble

I would recommend this book to a friend as it exciting and engaging with lots of twists and turns along the way.

What other book might you compare Six Years to, and why?

I'm a fan of Harlan Coben, this doesn't fail to impress like his other mystery thrillers.

The ending is just fantastic!

I don't think that I've ever gotten through an audiobook so fast.

I'm keen to download Coben's other books that I've not yet read.


Enjoyed this, and it was about the right length as I wouldn't have wanted it to go on for too much longer, its got a good pace the only thing I didn't like is that it reminded me of Tell No One in places.

Good listen for a commute or a holiday!

I listened to the whole book in just a couple of days. It is another page-turner. Some of the themes and plot lines will be familiar to Coben fans .... but apart from that small criticism there are great characters, and some comic moments to alleviate the well judged tension. Kerry Shale's reading is masterly.

This might have been a great listen ... intriguing premise ... ok baseline narration .. bu then ... THE VOICES!!!! Marge Simpson seemed to be the go to for most of the female characters whereas some of the male ones free ranged between Police Chief Wiggam to Beevis and Buthead but not one character apart from the protagonist uttered anything that could be taken seriously.

There was one female character - a girl who worked in a shop, who seemed to have a saccharine simpering girlie voice but the rest of the women just sounded like husky lumberjacks doing their first drag act.

Grew to hate the protagonist and his smug swaggering dialogue before long too so just could not take anything seriously and not sure if the story just fell apart and became unbelievable or if the narrator just make it unbearable to listen to any more.

I hated this book!!

Why because the story drove me to listen to it and not stop until the end. With out doubt one of the best, with great a narration by Kerry Shale

Would you listen to Six Years again? Why?

I wouldn't listen to it again as I now know the plot and ending!

What other book might you compare Six Years to, and why?

It is a keep you guessing type of story. You think you have guessed right then there is a twist.

Have you listened to any of Kerry Shale’s other performances? How does this one compare?

No, I have never listened to him before. I liked his voice, the only thing that did put me off a little bit was when he played the teenager and a female.

Not particularly moved me but felt sorry for the main character at times.

The tale gets ever more complicated....really good

when it started I thought it would be over and not interesting but it grew with each chapter. The story is good and keeps you on your toes. Well worth reading

Not Harlan Coben’s best work. The narration was rather irritating, as all except the main character sounded like characters from The Muppets.

The narrating was painful, especially the voicing for the lady characters. It was cartoonish in places.

Loved and enjoyed the narration, suspense and story. Great acting in the voice of the narrator.

I used to love Harlan Coben books. Maybe it's the listening that's putting me off now. They are so cliche and well...kind of light on substance. The narrator for this book has a nice voice for the main character but all the other characters he attempts sound like cartoon characters from The Simpsons! A real shame. I struggled to get thru it. I hate giving up on a book once I start but I found myself drifting off listening to it and not bothering to rewind to catch up.

6 Years hooked me within the first chapter. The story was intriguing and the narrator did the characters well.

Absolutely loved listening to this book! The readers voice was amazing and the story was brilliant. A few predictable elements, but overall great!!!

Would you listen to Six Years again? Why?

No. There are so many books on my wish list that I don't listen to the same book twice.

What was one of the most memorable moments of Six Years?

The whole book. It all comes together and there are definately some 'ah ha' moments. It flows very well without giving the secrets away.

Have you listened to any of Kerry Shale’s other performances? How does this one compare?

This is my first Kerry Shale book. It wont be my last. He was very good at keeping the flow and not mixing up his characters. And he had some good voices :-)

No. I wanted to savour it.

I picked this book after reading Fool Me Once by the same author. I see Harlan Coben has many more books that I am hoping to get to.

This book is frustrating and terrible

This book was slow to get started. I had to listen on double time to speed it up and get to the point. Worse than that the storyline reeked of normalising stalking behaviour. Men need pop culture to teach them that if a woman marries someone else and tells you to stay away, you should take her at face value and not pursue her to the ends of the earth. Without giving too much away, the book is implying that the main character and his love interest do have a real connection, however, in real life, real life stalkers also believe that they are in love with their victim. Stop normalising this type of behaviour! Just stop.
Hated this book.

I love Six Years. Kerry Shale’s narration is superb as usual. Coben is one of my favourite writers...please keep on thrilling your audience.

fast paced no slow intro. gets straight to it which is what I love. fantastic

A most gripping story, a very well read story . The narrater was excellent and the humour within the story was also very good. A most
Compelling story and a great ending . 10 out of 10.

The synopsis sounded like a light romantic novel, obviously a good one, judging by the amount of stars beside the title. Lots of twists
Not what I expected - much better!