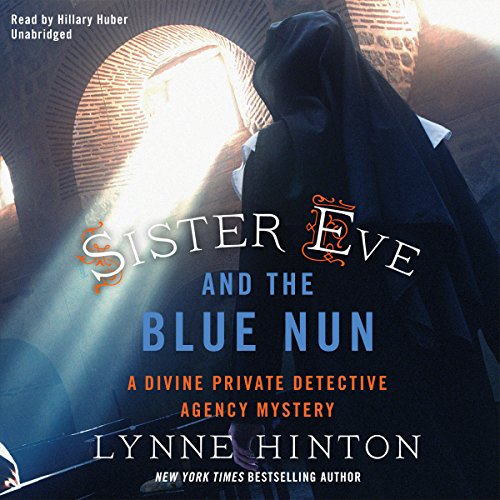 Sister Eve and the Blue Nun

After a murder at the monastery, Sister Eve may need a miracle if she is to prove a dear friend isn't a cold-blooded killer.

Sister Eve, a motorcycle-riding nun with a natural (or is it supernatural?) gift for solving murders, returns to the enclave she once called home and quickly finds herself confronting yet another mysterious death.

Someone has poisoned Dr. Kelly Middlesworth - a researcher on the life and ministry of the 17th-century's revered "Blue Nun" - and a set of irreplaceable historic documents has disappeared before they could even be examined.

When all evidence points to the victim's brother, Sister Eve sets out to expose the real killer and learn the explosive truth contained in the missing manuscripts.

Chasing a killer is dangerous work, and as her two worlds collide, Sister Eve may need some heavenly help simply to survive.

What listeners say about Sister Eve and the Blue Nun

Sr. Eve is Growing as a Character

This is the third book of the Sister Eve Divine series. The first book was a little hard to get into and I almost put it down, but plowed through and enjoyed it enough to go on to books two and three.

We find Sr. Eve still trying to make a decision about her future (which sounds rather implausible- I don't believe the Benedictines would let a nun take multiple leaves of absence). This story takes her to the monastery that has been her home for twenty years. The keynote speaker for a conference on The Blue Nun has been murdered and of course Eve has to solve the crime.

The story is good; however there are loose ends and odd plot devices. I would have given it 3.5 stars if I could have. There are rabbit trails about the Catholic Church and the improbable story of a co-ed monastery. I grew up as a Catholic and have never heard of a co-ed monastery with a male abbot overseeing the spiritual direction of women. And Hilary Huber's narration is so slow that I had to play the narrative at 1.25 speed.

I will read a fourth book, if one is written, but if Eve hasn't made a final decision by the end of the fourth book, I will not read a fifth.

I enjoyed the second book about Sister Eve and look forward to more. I liked the narration. I recommend the book.