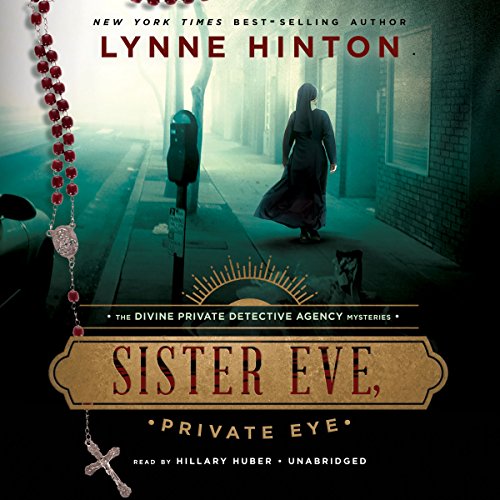 Two decades into her calling at a New Mexico monastery, Sister Evangeline Divine breaks her daily routine when a police officer appears, carrying a message from her father. Sister Eve is no stranger to the law, having grown up with a police captain turned private detective. She's seen her fair share of crime - and knows a thing or two about solving mysteries. But when Captain Jackson Divine needs her to return home and help him recover from surgery, Sister Eve finds herself taking on his latest case.

A Hollywood director has disappeared, and the sultry starlet he's been running around with isn't talking. When the missing man turns up dead, Captain Divine's case escalates into a full-blown murder case, and Sister Eve's crime-solving instincts kick in with an almost God-given grace. Soon she finds herself soul-searching every step of the way. How can she choose between the vocation in her heart and the job in her blood?

A Solid First Book In A New Series

I enjoyed this detective story/mystery. If you use the cover of books to decide about the content and whether it will be something you might like--this jacket photo is misleading. While the main character is a nun the book is not religious. Yes--the concept of discernment--meaning characters deciding what is right for them in life during the story is an aspect--but that's about as far as it goes. These ideas are all plot based and fit well into the storyline. So don't let the cover scare you off--it's not the way the picture makes it seem.

The book has a strong feeling of local color and is firmly grounded in New Mexico and its culture when it comes to the people and places presented. I thought the narration was good with clear changes in voice for different characters--but nothing over the top or too extreme. It was just enough to make it easy to follow the story.

The strongest aspect of the book was the personal connection between the main characters and the excellent dialogue. These felt real and had an easy flow. This isn't an edge of your seat action thriller or a plodding police procedural either. Instead, it is a private detective, filled with local color, character driven mystery. I would have liked a little less of the neat and tidy plot conclusions and maybe a twist or two more--but it was good. A quick and engaging listen.

Sister Eve is a 40 something nun in the American Southwest who prefers a Harley and boots to her habit. Her lifestyle is in the process of change, and she is not coping very well. Then comes word that she must return home immediately to give support to her ex-cop/private investigator father who is a mite testy on a good day. Her sister took care of her mother in the days between diagnosis and death from cancer, so now it is Eve's turn. He has just been engaged by a client on a missing person case, and it soon turns into murder and more. The suspense and plot twist in the investigation and beyond are well plotted and keep the reader engaged to the end. But I am a nurse, and I am very pleased to tell you that the dramatics relating to the nearly emergency amputation of a lower leg as a complication of Diabetes, the turmoil and grief following this, and the reactions to adapting to an artificial limb are spot on! Come for the mystery, and leave with a valuable learning experience.
Hillary gives a worthy performance, and provides sincere voice interpretations which certainly enhance the written word.
Purchased as Whispersync for less than $5.00.

I was really looking forward to this one . . . but could not stick with it. Lynne Hinton is a favorite author, but this story didn't ring true to me. Some of my favorites of hers are: Friendship Cake and the Hope Springs Series. I will have to skip out on this series though.