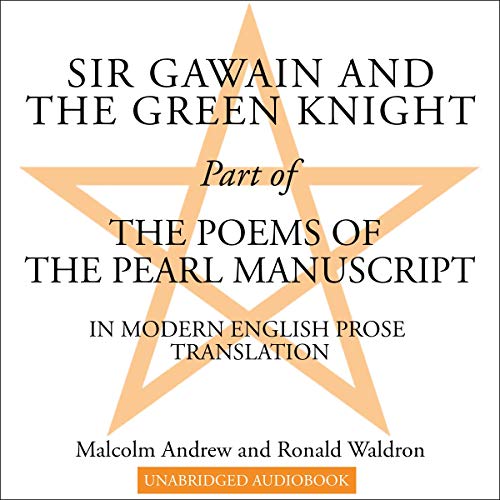 Sir Gawain and the Green Knight

Sir Gawain and the Green Knight is perhaps the best-known Arthurian romance in the English language, praised by Tolkien as "the best conceived and shaped narrative poem of the 14th century, indeed of the Middle Ages, in English."

Its story is well-known: New Year celebrations at Camelot are disrupted by the fearsome and strange appearance of the Green Knight who challenges Arthur's court to a game consisting of an exchange of blows; the Green Knight's survival of the beheading that ensues locks Sir Gawain into a commitment to receive a return blow a year later, bound by his honor to fulfill the terms of the game.

After an arduous journey to seek his nemesis Gawain arrives at a magnificent castle where his jovial and welcoming host has a disconcertingly beautiful wife. Persuaded to rest before continuing on his quest to find the Green Knight, he is tempted three times by the lady who attempts to seduce him. His eventual minor fall from grace is forgiven by the lord of the castle who is revealed as the Green Knight; Gawain returns to Camelot in shame and failure, where the court contends that Gawain has succeeded triumphantly.

The near-literal prose translation is designed to facilitate understanding, and is faithfully based on Andrew and Waldron's fifth edition of The Poems of the Pearl Manuscript. This audio edition, expertly read by Professor Sarah Peverley, includes the unaltered introduction to Poems of the Pearl Manuscript in Modern English Prose Translation, and Sir Gawain and the Green Knight itself.

What listeners say about Sir Gawain and the Green Knight