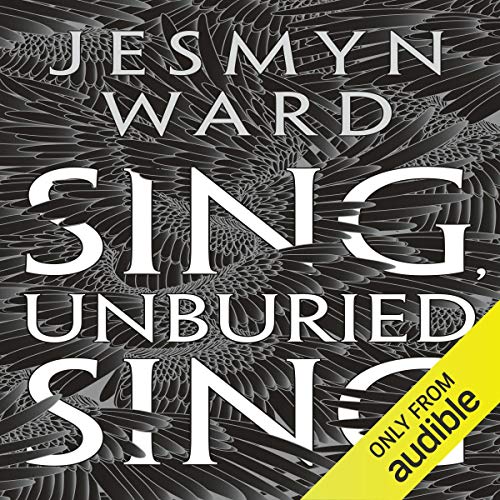 An intimate portrait of a family and an epic tale of hope and struggle, Sing, Unburied, Sing examines the ugly truths at the heart of the American story and the power - and limitations - of family bonds.

Jojo is 13 years old and trying to understand what it means to be a man. His mother, Leonie, is in constant conflict with herself and those around her. She is black and her children's father is white. Embattled in ways that reflect the brutal reality of her circumstances, she wants to be a better mother but can't put her children above her own needs, especially her drug use.

When the children's father is released from prison, Leonie packs her kids and a friend into her car and drives north to the heart of Mississippi and Parchman Farm, the State Penitentiary. At Parchman, there is another boy, the ghost of a dead inmate who carries all of the ugly history of the South with him in his wandering. He too has something to teach Jojo about fathers and sons, about legacies, about violence, about love.

Intensifying Captivating and poetic. so much depth and feeling. It allows you to see every scene.

I loved this book, a beautifully written piece that drew me in. Distressing subject but worth the trouble to listen. Great Narration by all the actors.

A very moving story. All of the characters were compelling, but particularly Leonie - the author had so much compassion for her without letting her off the hook for her selfishness. The magical realism elements were great: they added to the story and to the characters and fitted in v well.

The production was well done, with excellent narrators

I loved this novel. The three voices perfectly narrated the visceral ache in the lives of all the . The landscape of the deep south and its humanity, family relationships and poverty treated with the utmost respect.

Not my favourite book

I loved this audio. I also have the book so I read and listened to the audio depending on what I was doing. The audio was captivating as I sure if only read it would have also been. The story was written well from each point of view so easy to be caught up with each character and their perspective. I loved it

This is a beautiful and painful story of a poor, mixed raced family dealing with the issues of racism, drugs, murder, cancer, prison, coming of age and family history. Chapters are told, and read, by different character voices. Principally there is Jojo, a teenage boy who is a surrogate parent to his baby sister, due to the parental failings of their needy, drug-using mother.They are on a journey to collect their mother's boyfriend from state penitentiary and during the trip we hear the family's dark histories. There are also the spirits of grieved characters along the way and JoJo acts as a conduit with his grandparents including the strong Pops and the dying grandmother. The story is massively overwritten and Ward is the queen of simile which she exploits throughout the story. This is beautifully written and performed but will leave the reader feeling wiser but mournful

Takes some time but gets really good

Rutina Wesley´s reading is incredible. The other performances are good as well, but she really stands out. The story starts slow and I was zoning out a lot, but half-way through it gets really good so it is worth sticking with it.

I finished this in a day. There is magic in this authors story-telling and poetry in the narration. Stick with it.

Beautiful and compelling story! Raw and honest writing make this book heartbreaking at times and utterly uplifting at others. The narrators' are fantastic and carry the story and mood so very well!

One of the best books I've read in ages

Sing Unburied Sing is gripping from the outset. Thirteen year old Jojo is a compelling character and he pulls the reader in immediately. It would be impossible to not be heavily invested in his story, in his love for his grandparents and baby sister, in his understanding of the world as a boy growing into a young man and in his fear of the journey they head out on in order to collect his father from prison. While the book may be the story of a broken family, Jojo is the crux, and developed so incredibly well by Ward.

The spirits that follow Jojo about, hoping for closure, add to the complexity of Jojo's character but also allow the author to offer thoughts on the state of race relations in the US currently, referring to its history and potential for the future. There are several layers of meaning in every beautiful sentence. It's the kind of book you want to read over and over to revel in the sentence structure.

The narration was excellent. In particular I loved Leonie's weak and shrunken portrayal. The voice of all characters added to the significance and intention of the story.

Where does Sing, Unburied, Sing rank among all the audiobooks you’ve listened to so far?

One of the best audiobook I have listened to, great performance and gripping story.

I really enjoyed this book. So well written, with strong complex characters. The supernatural element helps to blend the horrific facts of history into the story. I'm so glad it was told from the perspective of a few characters, I don't think I would have enjoyed the book as much or liked some of the harder characters such as Leonie if it was all from JoJo's point of view.
There were points were I wanted to put this book down because the impending sense of grief was overwhelming, but I simply couldn't. The story is so gripping you have to keep reading.