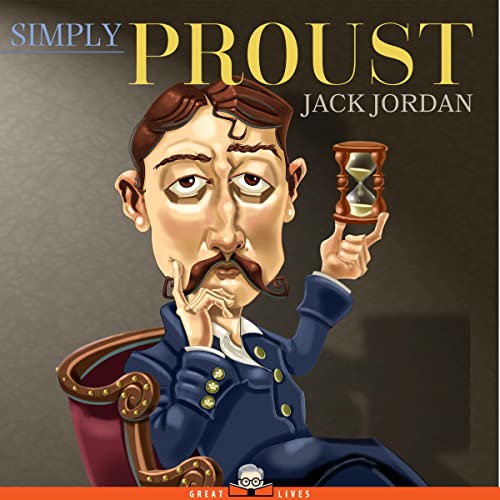 By: Jack Jordan
Narrated by: Caroline Holmes
Try for $0.00

Marcel Proust (1871-1922) was born in Paris during a time of great social and political upheaval, a ferment that is dealt with extensively in his monumental work In Search of Lost Time. He was a sickly child and spent the earlier part of his short life pursuing a variety of sometimes frivolous activities, which led to his not being taken seriously as a writer. It was not until 1909, when he was 38 years old, that he began work on the groundbreaking novel for which he is known, a task that consumed the rest of his life.

In Simply Proust, Professor Jack Louis Jordan presents an incisive, yet thoroughly accessible, introduction to Proust’s landmark work, helping the listener to fully appreciate the scope of the author’s achievement, as well as the fascinating process that underlay its creation. Emphasizing the fundamental role of psychology and the unconscious, Jordan shows how Proust’s methodology and our understanding of his novel are connected, and how this makes for a unique and endlessly revealing literary experience.

At once philosophical, psychological, and deeply human, Simply Proust offers an invaluable entry point into a masterpiece of world literature and takes the measure of the flawed and brilliant man who transformed the material of his life into a transcendent work of art.

"Simply Proust pulls off with ease the arduous task of making Marcel Proust’s masterwork accessible, without sacrificing none of the complexity that makes it one of the most important novels of the 20th Century. To do this, Jack Jordan vividly paints vast the cultural, scientific, and philosophical background that fed In Search of Lost Time. Armed with this knowledge, both new and repeat readers are bound to gain fresh insights into the brilliance of Proust’s novel.” (Hervé G. Picherit, Associate Professor of French, University of Texas at Austin)

What listeners say about Simply Proust