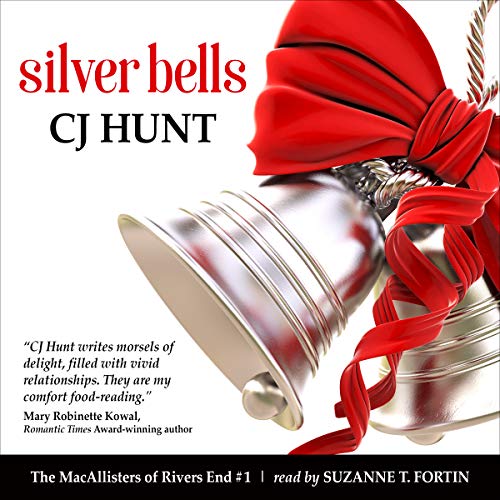 Isaac MacAllister’s life revolves around building his business and doing his best to give his daughter, Sara, a strong sense of family. Over the years he’s had to learn how to keep their little family together on his own, but this Christmas Isaac is going to have some unexpected help.

Christmas blogger Jenna Murphy has one goal for the holidays this year: to get far away from anything to do with Christmas. Her website sale is done, and after 1,825 posts about the big C, it’s one “season” she never wants to celebrate again. She’s ready to start a new life, and the Big River Lodge seems like the perfect place for her to figure out the details. The lodge is isolated, she has her own private cabin, and no one in her family will know where she is.

But she didn’t plan on the highly distracting presence of Isaac MacAllister. Is Jenna going to let one sexy dad and his sweet kindergartener derail her plans for her holiday...and her life?

What listeners say about Silver Bells: A Rivers End Romance

Can you run away from Christmas?

I’m going to be honest – I don’t like Christmas.

Oh, good, the world didn’t come to an end.

I was enamoured with it as a child, of course, but things changed as I grew up. The fact the whole religious story was being overwhelmed by crass commercialism was bad enough, but people spending tons of money buying gifts didn’t appeal to me. I felt like we, as a society, were missing many of the important points.

Then my best friend died on Christmas Day. That pretty much did me in.

“Jenna Murphy had one goal for this holiday season - to enjoy ten days of a completely Christmas-free existence.”

That’s MY girl! Get away from it all and soak in the hot tub. This is why I love Jenna Murphy.

She arrives at the Big River Lodge with the express purpose of avoiding Christmas and all things holiday-related. And she’s earned that break – 1,825 posts in 1,825 days about Christmas? What started out as a labour of love, became a source of income and, eventually, a successful business she was able to sell. OMG, I would have run screaming long before she did. That being said, she’s landed on her feet after having walked away – she just needs to figure out what she wants to do next. She has purchased a condo in Vancouver and is planning to settle there after the holidays. She is also hiding out in the cabin in the woods on Vancouver Island to get away from family. Some of us have those relatives who we go out of the way to avoid. Again, she’s a woman after my own heart.

As we know, things don’t always go the way we had planned.

The owner of the lodge is Isaac MacAllister. He’s a loving dad who cares for his young daughter and the best way for him to do that is by working and living in the same place. The property enables him to be close to his daughter Sara, and he has a family who supports them. He’s a good host, and showing up on Jenna’s doorstep the day after she arrived with breakfast was just part of the good service. Her choice of pyjamas? Well, he’s intrigued, that’s for sure.

And Jenna is quickly taken by the handsome man who is so protective of his daughter, willing to put her first. Circumstances force Jenna, Sara, and Isaac into close circumstances. As someone who lives away from the big city and knows British Columbia’s woods often have storms that take out the power – I understood this problem.

Jenna did do one very irresponsible thing and although there was a good excuse, I cringed. It was great for the plot, but didn’t speak much for her intelligence and common sense. That being said…yeah, I might have done the same thing. It is noted, that Jenna “was stubborn, not stupid”. I liked that she was able to own up to making mistakes.

Of course Jenna, Isaac, and Sara spend Christmas together and Jenna even stays on long enough to meet the rest of the family – including Sara’s uncle Lucas. He had known about his sister’s infidelity, but had held his tongue to save Isaac from being hurt. Even now, four years later, he is still paying for that mistake. Isaac’s sister Shannon is hell-bent on making his life miserable, but he is dedicated to being close to his niece and rebuilding his friendship with Isaac.

This novella is Book 1 of The MacAllisters of River’s End, a series I look forward to delving into. I adore that these books are set in beautiful British Columbia, showing off the amazing Canadian wilderness as well as the small-town friendliness. The question is – will Jenna choose to turn away from the big-city to live the simple life?

Suzanne T. Fortin is a new narrator to me, but I was impressed. There are a lot of interior monologues and I never had trouble distinguishing between what was being said inside the character’s head and what was being uttered aloud. Her voice for Sara was perfect and she gave Eli the perfect sleazy voice. My only gripe – and it is small – is that the point of view changes quite frequently, even within a scene. What I am incredibly grateful for, however, is that Suzanne paced the narrative in such a way that the pause was always there, letting me know a change was coming. Too often, narrators negate that pause and I, as a listener, am scrambling to figure out whose head I am in.

This is a great first novella and I am so excited to hear more.

it was a very sweet, and fresh holiday listen. it was just long enough to make me close my eyes, and long for my own romantic white Christmas. I highly recommend listening to it if you're looking for a little romantic pick me up.