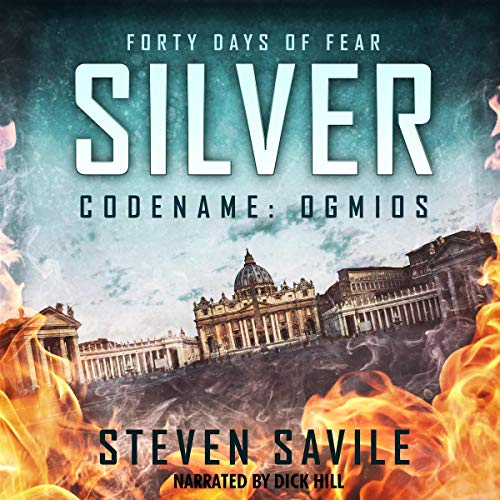 By: Steven Savile
Narrated by: Dick Hill
Try for $0.00

"There is a plague coming....For forty days and forty nights fear shall savage the streets. Those steeped in sin shall burn. The dying begins now"

With this chilling message a wave of terror unlike anything the world has ever seen sweeps the streets of Europe. Thirteen martyrs burn themselves alive in thirteen major cities simultaneously.

And this is just the beginning.

A religious cult calling itself the Disciples of Judas has risen in the Middle East. They twist the words of ancient prophecies to drive home the fear. Everything you believe in will be proved wrong. Everything you hold true will fail.

Day by day the West wakes to increasingly harrowing acts of terror. As fear cripples the capitals of Europe, the only question is where will be the next to fall? London? Rome? Berlin?

In a race against time - believing the terrorists intend to assassinate the Pope - Sir Charles Wyndham's unique Special Ops team, codename Ogmios, track a labyrinthine course through truth, shades of truth and outright lies that takes them from the backstreets of London to the shadow of Checkpoint Charlie in Berlin and all the way into the heart of the Holy See itself.

What listeners say about Silver

Thriller with a complex plot and flawed heroes

A religious cult, the Disciples of Judas, believe that Judas was the real Messiah who made the true sacrifice. The cult has sent messages to 13 cities in Europe promising a reign of terror - forty days and nights - to devastate the faith of the Christian believers. There are bio-chemical suicides in Berlin killing many innocents; then poisoned water in Rome killing more. Fear is wide spread as no one knows where or what evil will strike next as the forty days continues.

A covert government group, Ogmios, is racing in at least four directions to uncover the leaders of the cult and try to stop a believed plot to assassinate the Pope. The story follows the operatives in their efforts.

The story was a bit convoluted - maybe due to the audio. Chapters of history flashbacks popped in among the current day action without being identified by date so it caused some confusion. I really was impressed though by a very complex plot that the author tied together by the end.

There was plenty of action and yet there were moments of slowness so I think the pacing could have been improved. There were some philosophical discussions included that might not interest readers who just want flash and bang. Although that slowed the story in parts I found it interesting especially in the full scheme of the plotline. I enjoyed learning the characters’ backgrounds, demons and vulnerabilities. This made them very real in their actions.

Audio Notes: I have always enjoyed Dick Hill as a narrator and he is part of the reason I chose this audio to review. He does a wonderful job with accents on the different character voices. The reading didn’t seem totally consistent as there were areas of heart stopping anticipation but other spots in the discussion portions and even some points of action where dry in the narration.

Overall this was a good reading performance and a positive listening experience of a very interesting story. I recommend it for readers who enjoy action thrillers and who don't mind a bit of philosophical, religious pondering mixed in with the action.
I selected this title for review through Audiobook Jukebox.

What an amazing adventure!

I really enjoyed this story, the detail, action, the 'what ifs' all made it very entertaining. Cannot wait for the next one. Dick Hill did a great job bringing the characters to life and the different accents were fantastically done.

I loved the intricate plot of this and it’s collection of disparate characters was further enhanced by the exemplary narration that felt almost like a full cast audio such was the variety to the voices.

The worst attempt at Britsh accents ever heard

It's a common belief that the worst British accent an American ever attempted was by Dick van Dyke in Mary Poppins. Dick Hill clealry wasn't going to let that challenge remain uncontested.

Who on earth thought this narrator was feasible choice for a cast of British characters.